When you step inside Plush Paws Pet Salon, an Orlando–based dog and cat grooming salon, you will immediately begin to understand why the popular salon has become a favorite amongst locals—even winning the title of “Best Groomer,” in 2015 by Orlando Weekly and Orlando Sentinel.

The now 30–year–old owner, Laura Watts began grooming when she was 21. Growing up, Watts was always drawn to animals. Along with caring for her own goldfish, hamsters, birds, and other pets, Watts also gladly volunteered to care for her class pets in school whenever she was given the opportunity.

Building a business from the ground up takes creativity, imagination, and an unbelievable amount of hard work. While maintaining a full–time job, Watts worked many late nights planning her business. The salon itself is carefully designed to be welcoming and unique. The work of local artists decorates the walls and is available for purchase, fun music helps maintain a positive environment, and the overall style of the salon is a creative one.

“My grandfather, whom I was incredibly close to, was diagnosed with a terminal illness,” Watts explains. “We had to hire hospice. After going through that personally, I didn’t think that it was something that I would be capable of doing.  I thought I’d associate my career choice with the death of my grandfather and it just was not something I wanted to relive on a daily basis. So, I quit the nursing program.”

Milton Beckworth, Watts’ grandfather, was a hero and role model to her. “He was in the special forces in the military,” says Watts. “In fact, he is one of the founding fathers of the Alamo Scouts. They made a movie about him and his troop called “The Great Raid.”

As Watts began to rethink her future career, she knew that whatever it was that she would end up doing, she wanted to make her grandfather proud.

While she was in nursing school, Watts was working two part–time jobs to make ends meet. After quitting the nursing program, she had the drive to transition from jobs that just pay the bills, to a stable career. One of her jobs was working for a corporate pet store where she cared for animals and worked with customers. She was well–known for her hard work and great customer service, but being a part–time job, Watts was ready to move onto something else.

“I put in my notice at the pet store and I got offered several different management positions because they wanted me to stay,” says Watts. After considering the different positions offered to her within the store, Watts found herself with a position in the store’s grooming salon. The new position included full training to become a groomer and a motivational mentor to help her every step of the way. She was hooked.

Like many groomers, Watts started out by learning the basics of bathing and prepping dogs. While working as a bather, Watts was always noticing the groomers and paying close attention to what they did. She found herself fascinated and eager to learn.  It didn’t take long for Watts to begin grooming, and within her first year of grooming, she was already promoted to manager.

She quickly worked her way up and went on to manage at different locations for the company. Everything that the work involved felt natural for Watts. Caring for animals, managing, grooming, and customer service were all things that she enjoyed doing.

In 2010 Watts took the next step in her career and created Plush Paws Salon, her own grooming business. She was excited to run and manage her own business, but a very severe car accident would put her business, and life as she knew it, on hold.

After being involved in a serious car accident Watts was unable to work. She had to undergo multiple surgeries and had a very long recovery time before she was well enough to do what she loved again and work as a groomer. Being unable to work meant that Watts would have to close down her first attempt at Plush Paws Salon.

“It took me about two and a half years before I reopened,” says Watts. “I started really small because it was literally just me.” It was July of 2013 when Plush Paws Salon reopened. Watts felt at home when she could start grooming again, and what started as a solo business, would end up growing faster than she could have imagined. Watts’ dedication to her clients and her love of grooming made Plush Paws grow organically. “It just blew up,” Watts says.

The support of her family and knowing how proud they were of her hard work kept motivating Watts to move forward. The growth of her business included hiring employees, expanding her services, and of course growing her client base. She even groomed a few celebrity pets including Castro, Daniel Tosh’s dog. Her business continues to grow with plans to expand to a larger location in the near future.

Life is unpredictable and two traumatic events in Watts’ life, the loss of her grandfather and being involved in a serious car accident, were major turning points. Losing her first business could have made Watts give up her dream, but instead, she worked harder than ever to make her second go at Plush Paws a success.

It was not just the hard work that paid off for Watts. It was her careful planning, dedication, and genuine concern for the well–being of the animals that she works with that made her business stand out right from the beginning.

Watts explains that much of her success comes from the growth overdrive she experienced after her accident. “People focus on PTSD (Posttraumatic Stress Disorder),” says Watts. “A lot of people don’t know that posttraumatic growth is the positive side in the spectrum of that.”

“It is so significant to me and my career,” she says. “I went into growth overdrive. I’m not just talking about business–wise, but personally, I got in the best shape of my life after my car accident— after being cleared by my doctors.”

What Watts went through, and how she dealt with it, is a reminder that even when bad things happen, you can find a way to better yourself from the experiences. She lost her first business, but she came back with a business that is a dream come true. “It’s really about what you take from something horrible,” she says. ✂ 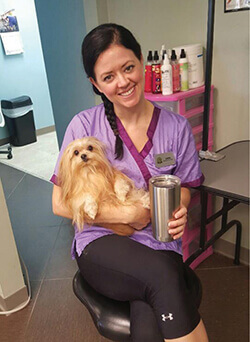 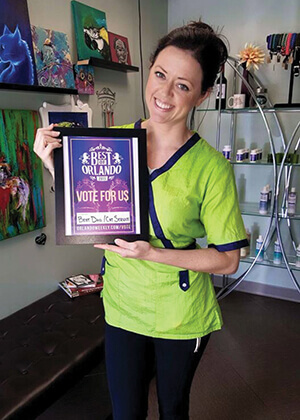 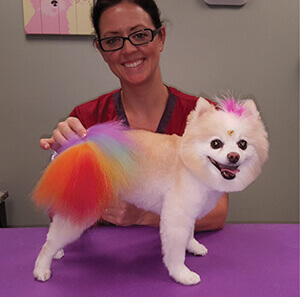