If you were to ask any groomer who has ever been in the competition ring if they would like to be a member of GroomTeam, their answer is likely to be a resounding “Yes!” Becoming a member of GroomTeam is not easy; it’s an honor that you have to earn. The only way to get on GroomTeam is by entering GroomTeam-sanctioned competitions and earning points with your placements. The top four point earners enjoy an even higher honor: becoming members of the traveling GroomTeam. They are sent — all expenses paid — to compete against top groomers from all over the world.

Jodi Murphy and her daughter, Mackensie Murphy, have both earned memberships on GroomTeam USA. They are the very first mother and daughter in the United States to accomplish this incredible feat.

Jodi Murphy has been one of the top four point earners every year that she was on GroomTeam. She has been on the Traveling GroomTeam twice, going to Spain and Italy and taking gold at both competitions. She competed against 42 elite groomers from all over the world when she won the Oster Invitational Tournament of Champions.

Mackensie is hot on her heels with many impressive grooming competition wins. The most recent was this June when she won Best In Show at the NDGAA GroomFest in Denver, Colorado. Mackensie has become a GroomTeam member after only two years of competing and has her sights set on being one of the top five point earners this year.

What makes their story even more fascinating is that neither one of them set out to enter the contest ring — or even to become groomers. Jodi Murphy was in her thirties and had three small children when she started grooming. “I moved to another state, and I had difficulty getting my dogs groomed to my satisfaction,” recalls Jodi. “That’s when I decided that I would learn to do it myself.” Jodi became a bather at a shop and worked there for about a year, picking up grooming tips as she worked.

“I went to my first Barkleigh show in Pasadena and saw the mobile grooming vans,” says Jodi. “I knew immediately that I wanted to have a mobile business. At that point, I had to go out and seek knowledge, because I really didn’t know anything. I was so determined to learn; I went to trade shows and seminars and took private lessons,” Jodi continues.

“I worked with breeders and handlers trying to perfect my skills. I didn’t develop bad habits, because I worked with professionals, and I learned the correct way to do things from the start,” says Jodi. “Within three years of starting to think about grooming, I was a GroomTeam member.”

Mackensie’s route to becoming a groomer and earning her spot on GroomTeam was different from her mother’s. “When Mackensie was about ten years old, she would bathe dogs for me on the weekends,” says Jodi. “She went with me to seminars and competitions, and while she enjoyed them, she showed no real interest in learning to groom.”

When Mackensie went to college in Cincinnati, Ohio, she got a job as a bather to earn extra money. “It was while I was in college that I decided to learn grooming,” says Mackensie. “In the beginning, I didn’t want my mom’s guidance. I wanted to do it all on my own. I guess I was a little on the rebellious side,” says Mackensie with a smile and quick laugh. “When I was growing up, I had a grooming education on a silver platter available to me, but I didn’t take advantage of it.”

“When Mackensie told me that she wanted to become a groomer, I was surprised,” says Jodi. “I had mixed feelings. Part of me wanted her to get a good job with benefits, vacation time, and stability. We all know that when you groom and work on commission, it can be tough when you go through slow times and have bills to pay. And it’s a really strenuous job.” Jodi continues, “But when I saw how good Mackensie was, I thought ‘Wow, this is her calling!’

“Sometimes when Mackensie came home from college, she and I would go out in my mobile van and team groom a dog. I would groom one side of the dog, and she would groom the other, and I never had to go over her work. We groom so much alike!”

It wasn’t long before Mackensie decided that she also wanted to compete. “I went into the ring the first time fully prepared,” shares Mackensie. “I felt that I needed to be really ready because of who my mother was. I had really big shoes to fill, and it kept me from going into the ring for a while, but now it doesn’t bother me at all.”

Once Mackensie experienced the excitement and thrill of a competition and the feeling of accomplishment and victory that came with it, she knew she had found her passion. “As soon as one contest was over, I was planning for the next,” exclaims Mackensie. “I couldn’t get enough of it!”

Do you think that being Jodi Murphy’s daughter made life in the competition ring easier or more difficult for her daughter? Actually a little bit of both. “I remember my first competition,” says Mackensie. “I was in the ring in the first-timer competition, and another first-timer asked me whom I had learned from. I motioned toward my mom, who was at ringside, and the girl immediately said, ‘That’s not fair… She’s famous…You shouldn’t be in here with first-timers.’ So in the beginning, I really felt that I had to prove myself.

“I’ve definitely benefited, too,” continues Mackensie. “I have access to my mom’s contacts and the breeders she knows, and I’ve learned a lot from her friends. At the same time, it has made me work harder. I don’t want to be known only as Jodi Murphy’s daughter; I want to pave my own way.”

From the very beginning, Mackensie set her sights on becoming a GroomTeam member. Proving that the apple doesn’t fall far from the tree, it was a short two years from her first competition until she joined the ranks of GroomTeam.

Now that Jodi and Mackensie have both earned the distinction of being GroomTeam members, what advice do they have for anyone interested in joining them? “Do the best job you can do. Get critiques; they are super important. Then go home and immediately fix your mistakes,” says Mackensie. “That way, you won’t make the same mistake again.”

“Stay focused and remember why you are there,” encourages Jodi. “Do your homework. What you do before the competition is crucial. Go in with a well-prepared dog, then do your best and have fun!”

And don’t forget, the top four point earners become members of the traveling GroomTeam. “Being on the traveling team is phenomenal! It is the most exciting thing to represent your country,” says a beaming Jodi. “All the countries send their best groomers. It’s such a rush to be able to win when you are competing against 14 different countries and taking the gold medal. It’s an unbelievable feeling. I can’t wait for Mackensie to experience that, and I’m going to be right there with her!” 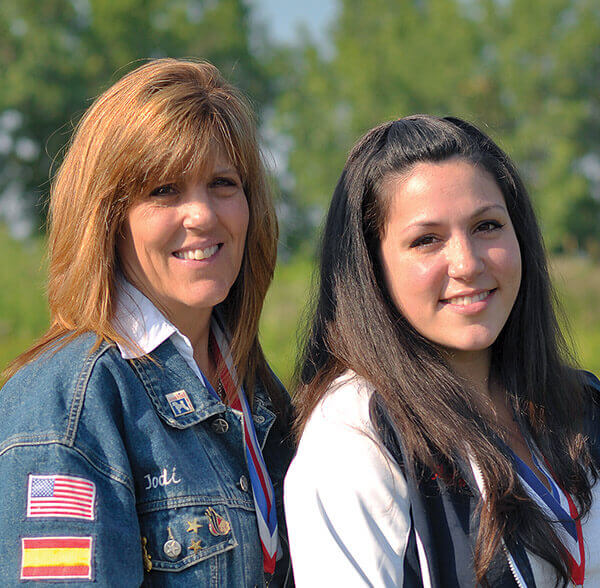