From Chemist to Groomer - Groomer to Groomer
Skip to content

Everyday heroes don’t dress up or write the word “hero” after their name, but even in their everyday-person-disguises, heroes are making a difference in the lives of the people – and animals – that they meet. A hero (or heroine) is a person with courage. We think of heroes as people with strong, brave qualities that we want to emulate, but those traits come in many forms. We walk amongst, and work beside heroes every day; and in our own unique ways, we are all heroic.

For 32-year-old Aubrey Bird, a career grooming pets, in many ways, is a heroic one. Bird is a busy and ambitious dog and cat groomer. When she is not busy fulfilling her role as grooming manager at Bayside Pet Resort in Florida, a full-service grooming, lodging, and training business with three Southwest Florida locations, Bird also owns and operates a business making bows and accessories for dogs. Bird’s handmade bow company, “The Little Bird Stop”, allows her to embrace her creativity while making accessories for groomers and everyday pet owners, including bows, bow streamers, bow ties, and more.

Before she found herself in the wildly rewarding grooming industry, Bird was working as a chemist. “I worked at a plant that manufactured steel alloys for anything from guns to jet engines”, says Bird.  “Depending on the use, their chemistries had to be very, very specific (you don’t want your jet engine melting on you)”, she explains.  The lab Bird worked in used OES (optical emission spectroscopy), and X-ray instrumentation to check for impurities while the plant was making the alloy.

When Bird moved from Pennsylvania to Florida, leaving her job behind, she could not find any positions in labs for her previous work, which was very specialized. In college, Bird had worked in a kennel and as a vet tech, so when she was offered a job as a dog bather in Florida, it sounded like the perfect fit. Bird took the job, and soon found herself learning to groom.

For Bird, that first year learning to groom was tough, but she didn’t give up. “I remember the instructor telling me I had a natural talent for scissoring, and while my first year grooming was rough, really rough, I became more confident and started to really develop my own style,” says Bird.  Bird enjoys grooming both dogs and cats, but it is the “fluffy” ones that are her specialty. “Bichons are my bread-and-butter grooms.  I could do them all day, every day”, says Bird. “I love a giant fluffy head and cute, round bichon buns”.

Helping dogs look adorable through grooming is a fun part of a groomer’s job, but Bird also believes it is important that the haircuts are practical, and last until the pet’s next visit. “My goal is to make sure the dog is going to look great one, two, or even six weeks later.  If one of my grooms comes in six weeks later for their next appointment, and the dog can still see, there are no random long hairs sticking out, and in general, looks good, then that’s exactly what I want”, says Bird.

Groomers can, and very often do, play a very important role in the lives of the animals that find themselves on their table, and for Bird, being able to help the animals that need her most makes her feel like a real hero.

“We play a small part in pet parents’ lives, but sometimes it can be very big”, says Bird.  Bird enjoys being able to give back, and like many groomers, she offers free services to pets in need. Recently there was a heartbreaking seizure of over two hundred dogs in Florida, and Bird donated grooming services to 13 of them who will be adopted out by the Humane Society.  “It is the best part of my job”, Bird confirms.

Finding a lump, skin discoloration, or anything else unusual on a pet can be scary. Bird emphasizes the importance of being observant as a pet groomer. “Every groomer I meet has a story about a time that they found a health issue with a pet, and brought it to a client’s attention, only to find out it was a serious issue”, Bird explains.

When Bird found a small spot where the skin was discolored on a dog she was grooming she told the owner who immediately took the dog to the veterinarian. Bird’s concerns were unfortunately validated when it was found out that the dog had a rare, and aggressive form of cancer, but with treatment the dog survived and is now happy and healthy three years later. If Bird hadn’t noticed something unusual on the dog, and treatment was delayed, there is no telling if the dog would have been as likely to make a full recovery. “Every time I see her I feel so lucky to have seen that”, says Bird.

Bird plays an important role in the well-being of the animals that she cares so deeply about every day. She believes it was her hero who inspired her to find a career that is so meaningful for her, and to grow up to be the hard worker that she is today. Six years ago Aubrey Bird’s life was forever changed when she lost her father. Bird describes the deep sadness and heartbreak she felt as world-shattering, but knowing how proud he would be to see her now brings comfort. “I know if he saw me now, constantly covered in dog hair, ribbon scraps, glitter, and a smile, he would be proud of me. I miss him every single day”, says Bird. “He was my hero”. ✂ 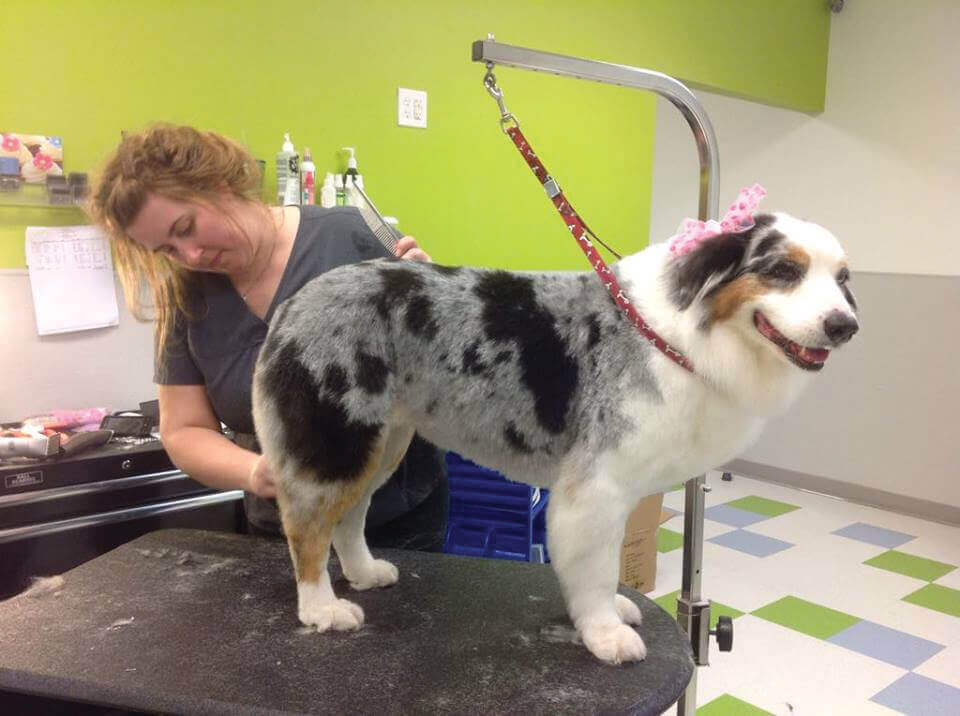