Presidents Day is a holiday for a lot of people, but not for mobile groomer Brandon Boyer. For the last ten years Brandon has owned and operated Splish N Splash Mobile Pet Grooming in the Chambersburg, Pennsylvania area.

February 17, 2014 began just like any other day. Brandon hopped in his truck and he and his mobile grooming trailer headed for his first appointment. He groomed the dog without incident and then went on to his next appointment. What happened at that next appointment changed Brandon’s life…

“I got the long-coated lab mix into my trailer and up on the grooming table,” said Brandon. “I was getting ready to assess the dog to see what I needed to do to him when I received a phone call. Within one to three seconds of getting that phone call, I saw a huge orange ball of fire and heard the explosion – and then I was on fire!”

Incredibly, even though Brandon was on fire, his first concern was to save the dog he was working on.

“I remember being bent over and pulling my flaming sweatshirt off,” recalls Brandon. “I immediately came up and looked for the dog. I saw his silhouette. I had to disconnect him from the support system on the table. I picked him up, put my shoulder to the door and sort-of busted through it. The door was somewhat opened by the explosion, but it was a mangled mess. Once I got outside, I fell forward and landed face down in the snow.”

And even while Brandon was lying in the snow, his burned, smoking fingers never let go of the dog’s safety loop.

“While I was inside the blazing trailer,” said Brandon emotionally. “I really thought that it was going to be the end of me. But once I got out, I realized that I was going to be okay.  I knew that I was in bad shape, I could feel that my face, head, and hands were burned pretty badly.”

Lucky for Brandon, the dog’s owner was looking out her window and saw the explosion as it happened. She called 911 before Brandon even got out of the trailer.

Her words were, “From what I saw, there’s no way anybody could have survived that blast!”

Help arrived very quickly. A few houses down, a neighbor who was a firefighter, heard the explosion and came running. Paramedics and first responders were there within minutes. Brandon was assessed at the scene.

He had extensive secondary burns, and when they looked up his nose and saw that the hair was all burned in it – it was decided that Brandon needed to be flown to a burn center in Washington, D.C.

The hospital that he was flown to was the one that all the burn patients from the Pentagon went to after the 9-11 attack.

One of the biggest concerns was that Brandon’s lungs and airways were also burned; but when he was examined and scoped at the burn hospital, it was found that they were undamaged.

“The first two or three days were extremely painful,” says Brandon. “On the third day I had surgery. They basically removed all the burned skin and flesh and gave me pigskin grafts. They had layers of pigskin that they placed across my face and stitched it to me. It acted like a band aid to allow my body to repair and heal faster.”

A few days later, Brandon was allowed to go home. As he healed, the pigskin began to break down and slough off.

“It was the worst smell ever!” said Brandon emphatically. “It was 28 degrees that Sunday when I got home and we had to open windows in the house. The odor was horrendous! But the grafts protected my healing face and helped prevent scarring. What was left of the pigskin was removed at my follow-up appointment.”

What could have caused that horrific explosion and the flash fire in Brandon’s grooming trailer?

“After talking with the fire marshal, it was determined that a propane heater was the cause of the accident,” says Brandon. “There was absolutely nothing wrong with my grooming trailer…the cause was definitely traced to the portable heater.

“I had a backup portable propane heater in my trailer. It was not on at the time. I was not using it, but it must have developed a leak between my first and second stop,” said Brandon.

Brandon had no idea that anything was wrong just before the explosion. He never smelled the propane gas. “I’ve had sinus surgery,” said Brandon, “and my sense of smell is not the best.”

We asked Brandon to tell us about some of the help and support he received since the accident.

“It’s amazing” says an emotional Brandon. “You become very humbled to the point that you are on your knees with gratitude for the support system that you didn’t even know that you had. When you go through something like this and you have people that you don’t know and haven’t met do extraordinary things for you – it’s unbelievable!

“I belong to an online community of Mako boat owners – first and foremost Classic Mako,” says Brandon. “Members from California to Florida and up through New England sent flowers, drove long distances to visit me in the hospital, and raised a lot of money to help me while I recover.

“In the grooming community, Debbie Rowe, of Frank Rowe & Son, was one of the first to contact us – to ask what we needed and what they could do to help us,” Brandon continues. “The GEAF (Groomers Emergency Assistance Fund) helped with a monetary donation.

“All of my products were lost in the explosion. Wahl and EZ Groom and some other companies sent me donations of products. I couldn’t believe that these larger companies would hear about what happened to me and then help me out.”

On March 9, a Groom-a-thon was held to help Brandon. Local groomers and others (some made a three-hour drive to participate) donated their time, talents, and their grooming vans and trailers to groom many of Brandon’s client’s dogs. And, many of the clients donated above their grooming fees to help Brandon while he recovers. Over $3000 was raised that day.

Brandon shares that sometimes social media gets a bad name, but not in his case. He and his wife, Amy, have been able to post updates and keep all of his friends and family informed about his progress. And, Brandon has received countless messages of support and encouragement from the online community.

Brandon hopes to be back to work much sooner than the doctors had estimated. He has strict guidelines that he will have to follow. Brandon will have to wear gloves and face protection at all times while he is grooming.

He has to keep SPF skin protection cream on his skin for the next year, to protect the skin on his hands, face, and head because over exposure can alter the pigment color of his new skin.

But no matter what it takes, Brandon and his Splish N Splash Mobile Pet Grooming will soon be on the road again. He’s been ‘through the fire’ and survived. 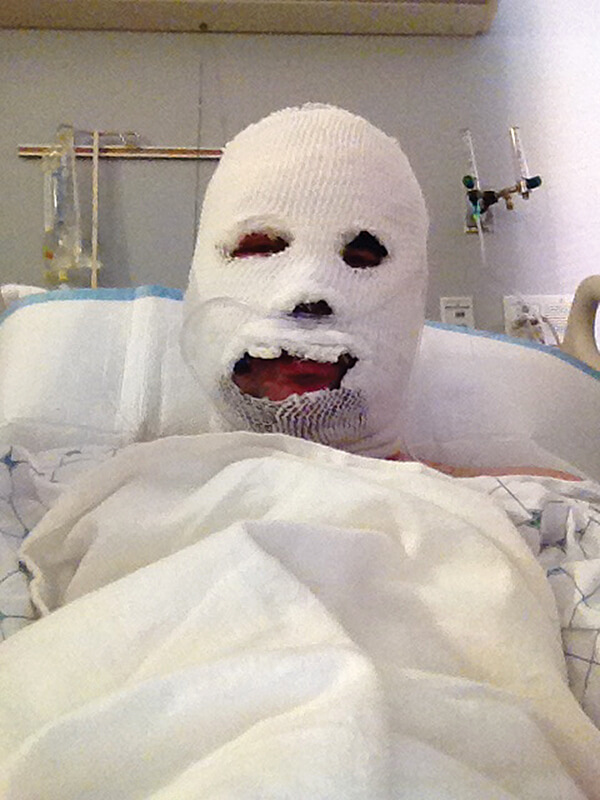 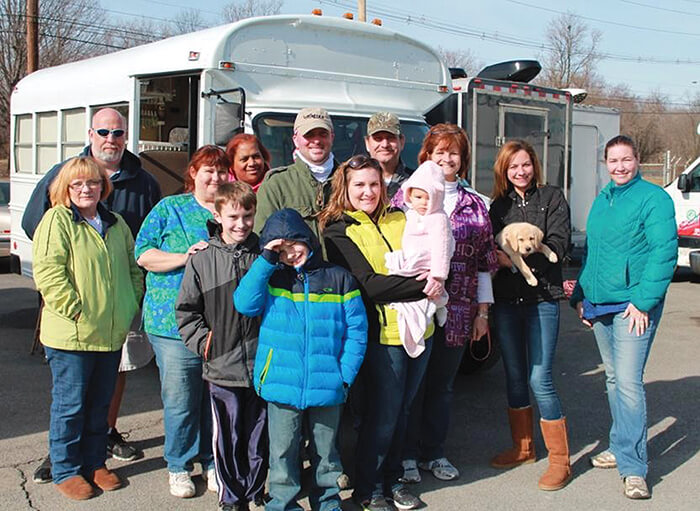