I love grooming and learning new things to keep it interesting. And it is always so much fun meeting the people we become friends with through the internet in person, and friends of friends who then become your friend. On this particular weekend I decided to spend some time with longtime friend and fellow groomer Helen Schaefer and attend a workshop on Asian Style grooming that was being hosted at Smoochie Pooch Salon in Portage, Indiana where Helen was working.

The seminar was given by the talented Riza Wisnom who has perfected Asian Styles and, will at the time this is printed, probably have her second book on the subject published along with a helpful DVD.

Riza executed two trims in her demo for us before the hands on part of the workshop began. My favorite of the two was the diaper trim that I chose to do on Scooby, one of Helen’s dogs who had not had a haircut for many months.

Fig 1) Though his coat had been maintained, he was really wooly.

Fig 2) The coat was cut very short from behind the occipital bone, to the withers, and all the way to his waist, uncovering his ribs and chest and pinching in at his shoulders so that his legs would then flair out at the bottom with cute bevels tapered down to the foot. Scooby’s back legs were clipped short just above the knee, all the way around his rear legs to create the bottom of the diaper. And then the leg hair going down would be trimmed to balance with the front legs, giving it the look of a teddy bear leg, small at the top and flailing out at the bottom just like most stuffed animals. The hair was left full over his back end and would later be scissored down to create the diaper. To make this trim really cute do not leave the diaper too big or it will look like a saggy diaper or poopy pants.

There are so many cute head styles so choose one that will go with the shape and amount of hair you have to work with. Scooby was growing out from tassel ears and Helen really wanted to keep the length so I did not cut them.

Fig 3) I chose to do a donut muzzle on Scooby with pom-poms on his head. After pulling up the pom-poms I scissored in his headpiece trying to make him look soft and as animated as possible.

Fig 4) I started scissoring the diaper butt part, but being the creative person that I am, I just could not help myself and scissored in a butt crack instead of smoothing out the diaper while Riza was helping other people in the workshop. Then to top it off I added pigments to make it look like Scooby was wearing a thong. We couldn’t stop laughing!

You may not want to send your client’s dog home like this, but (pun intended) you can practice this on your clients who get short trims then simply clip it off before they are picked up. If you choose to color, make sure it is something that can easily be removed if you do not first have free creative rein over the pet you are working on. Aren’t we blessed to have such a wonderful career?  ✂

Making the World more Colorful,
one dog at a time…
Queen of Color. To see more pictures of this grooming adventure visit www.queenofcolor.com or visit me on Facebook 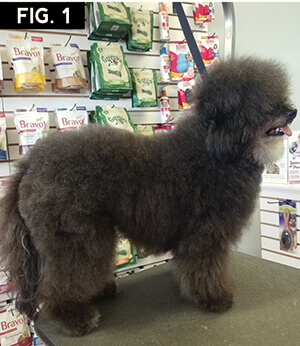 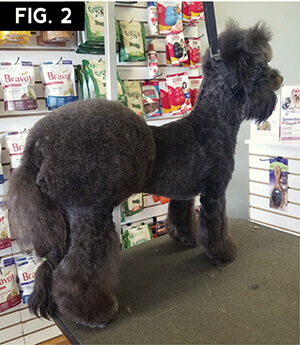 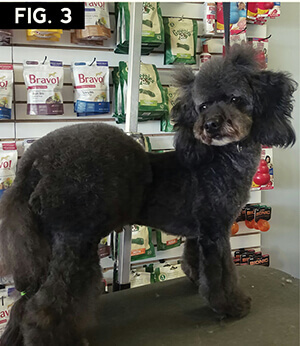