The Sharpening Trade: An Inside Look - Groomer to Groomer
Skip to content

Grooming is not the only service industry that requires complex skills using one’s hands along with a strong work ethic, a sharp eye, good judgment and patience. Groomers constantly (and sometimes desperately) need good sharpeners to keep our shears and blades in good working condition. Yet our interdependent trades are both experiencing shortages in personnel with the requisite skills to keep up with the demand for their critically-needed services.

There are varying business models in the sharpening trade as well.  Mobile sharpeners come to the groomer and shop-based sharpeners require delivering equipment to them. Groomers who live in more remote locations may need to mail equipment to the sharpener of their choice; however, they have to be prepared to have backup sets of all the blades and shears that they commonly use. Groomers also have the option of shipping their equipment back to the original manufacturer for sharpening with the advantage that expertise in their own product brings.

I saw an unusual model early in my grooming career—a sharpener who would exchange sharp blades for my dull ones on the spot. I did not get back the blades I originally bought, but in those days, there were few blade manufacturers and they were all very comparable.

A Variety of Skill Levels

We all know that when it comes to hands-on skills, not all people are created equal. Sharpeners have varying degrees of skill, just like groomers.

Groomers spend a lot of money on their shears. We can have such an intimate relationship with our shears that giving them to just anyone to sharpen is challenging and even scary. Amanda, a groomer in Chicago, tells me that she can clearly feel the difference in quality when her shears are sharpened by different people. Her relationship with her sharpener is one of trust and she trusts the one she uses now.  She stated that she would actually prefer to use dull equipment or just buy new equipment rather than use any other sharpener.

A Career in the Trade

I spoke to Rich Hassen of Shear Excellence Sharpening, a highly-respected mobile sharpener whose mobile van service serves the entire Chicagoland area and outlying rural areas. He encourages people to consider entering his profession because, as with grooming, sharpening provides an opportunity to make a very good living once the skills are learned.

No formal academic education is required, and one has to be willing to get their hands dirty. But, as with grooming, while the training curve to become a good sharpener can be several years, sharpeners I spoke to affirmed that the money is good.  The work is reliable and steady with the promise of a long and rewarding career that includes flexibility and the opportunity to own a successful business.

Like grooming, Rich tells me that sharpening blades and shears is a highly-complex skill that can require years to master. Specialized sharpening schools as we have in grooming just do not exist.

There are training programs to learn to sharpen but they are short and only designed to give someone the basics. Ideally, after their introductory schooling, a trainee would apprentice under a master sharpener. However, master sharpeners have little incentive to take on an apprentice when their time is already at a premium, and skilled artisans are cautious to divulge their secrets.

Sharpeners also charge more to sharpen the shears of beauticians and those who cut human hair. Groomers might not all be aware that cosmetologists buy shears similar to what we use, often made by the same companies. They can be different alloys with some differences, but human-hair cutters will pay upwards of $500-$1,000 for a pair of shears similar to that we would pay half that for. Their sharpening costs are higher as well, with some difference in technique, from the same skilled tradesmen who sharpen our shears for half the price. It is all based on what beauticians versus groomers are used to paying. This also may contribute to a shortage of sharpeners when groomers are not willing or able to pay the $30 or more for shear sharpening that beauty salons pay.

Another challenge to opening a sharpening business is the cost of purchasing start-up equipment. Just as groomers have start-up costs when building a grooming salon from scratch, sharpeners must borrow or invest tens of thousands of dollars to obtain the equipment they need to do their job as well.

I spoke to a respected colleague in my Chicagoland area, Charles Palm, owner of Midwest Grooming Supply. Chuck has a reliable and experienced service that sharpens blades and shears shipped from all over the world—and for some of us fortunate locals who can run out to his shop. The experienced gentleman that sharpens for him, like the rest of us, will not be working forever. We discussed the problem of finding candidates to train to one day replace his master sharpener.  Among other things, Chuck shared his concern that young people do not seem to be interested in these kinds of jobs.

One college advisor I spoke to said that, with regards to trade skills, many young people are simply not aware of career opportunities like this. Even if they hear about a career like sharpening that pays well and provides job security for life, it may not appeal to them if it falls outside the “computer-saturated world they were raised in.” With the proliferation of computers throughout our society and educational systems, it is true that many younger people don’t have much tolerance for or give any thought to something that does not involve a computer screen.

Unlike grooming, there are more men than women working in sharpening. Rich Hassen says sharpeners have to be willing to get their hands dirty. Only maybe three in ten sharpeners who train for the profession become true masters. “There is a definite knack to it that some people may never master, no matter how hard they train,” said Rich.

Some sharpeners work for a time but then quit because of the tedium and the routine of sharpening. But that is why Rich says he would always want to continue to work as a mobile—going from shop to shop and talking to the groomers he services. In doing so, he educates groomers on how to better use and care for their shears, and how to diagnose a problem in their scissoring.

Like any hands-on skill, one must be willing to learn from one’s own mistakes. Just as with grooming, the younger sharpeners are going to make mistakes—this has to be part of the training. However, when a sharpener makes a mistake, ethically, they should replace the shears or blade as the damage might be permanent. One warning sign for groomers is brown discoloration after the sharpening. Heat can change the temper of a shear by grinding too hard. The discoloration can be a symptom of a poor sharpening technique.

Good communication is needed between the client and the skilled artisan. Rich Hassen said that he can do a much better job of sharpening when the groomer clearly communicates what they are experiencing. Is the hair folding or is it sliding? “These are two different problems,” he says, “and there is a difference in how to do the sharpening in each case.”

Sometimes it is only our thumb position or the tension of the shears that is really the issue and he can help correct a problem with some good coaching. “I can’t fix what I don’t know about,” Rich tells me, underscoring the importance of detailed communication between groomer and sharpener.

The best way to find a good sharpener is to ask other groomers in your area for their recommendations. It is a wise groomer who does not trust a new sharpener with their best shears right away. ✂️ 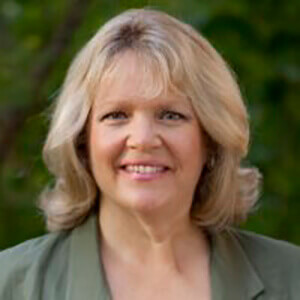 Jennifer Bishop–Jenkins, ICMG, owner of Love Fur Dogs in Glencoe, Illinois, was named Best Groomer in Chicagoland by the Chicago Tribune. She is the founder of the Illinois Professional Pet Groomer’s Association and serves on the board of both IPPGA and NAGA. Jennifer is a retired school teacher and author of The Groomers’s Guide to the 15 Coat Types, which will be available in 2021. Her academically–rich webinars can be found on Facebook under Groomer’s Guide, or by emailing [email protected]