Michael Rogers, Groomer to the Stars - Groomer to Groomer
Skip to content

Grooming celebrity dogs is a lot of work. After all, celebrity groomers play one of the most important roles in getting their furry clients ready for the world to see in magazines and on TV.

After getting groomed by Michael Rogers, dogs are left with a style that shows off all of their best features so they are ready for anything.

Rogers is the owner of Michael L. Rogers Mobile Pet Services, a business he has been running for 13 years in Los Angeles, California. Rogers fell in love with grooming when he was offered a part-time job that would lead to his future career. “I was in my senior year of college at Cal State Northridge majoring in journalism when I was offered a part-time job at a large LA grooming company,” says Rogers.

While there, Rogers worked with several different groomers, taking in everything he could. “I was eager to have the boss send me out on my own,” says Rogers, who was quickly realizing how much he enjoyed all aspects of grooming. “I was always very artistic and loved the challenge of scissoring dogs and grooming.” Through practice and more practice, Rogers’ skills as a groomer kept improving.

“I had become a very competent groomer and it was very satisfying for me,” he says. “Several years
later, I decided to open my own grooming company.”

Rogers’ client base of about 1,900 clients includes many celebrity and well-known pets. “Some of our famous clients include Goldie Hawn, Kate Hudson, Mark Wahlberg and Robert Downey Jr,” says Rogers.  Additionally, Rogers grooms dogs that have been featured in magazines, and that have starred in TV shows and commercials—not to mention internet superstars like the very well-known and loved Norbert.

Norbert is a very tiny dog with a large adoring fan base. The small mixed breed dog, owned by Julie Freyermuth, is a registered therapy dog who grew up in Boston, Massachusetts and now lives in Los Angeles, California. Norbert’s first picture book received nine prestigious book awards and his list of special accomplishments continues to grow.

“Norbert the dog is a very special client of ours,” says Rogers. “He is just about three pounds and is a registered therapy dog best known for being the star of Norbert’s children books, as well as his immense following and popularity on social media.”

Grooming Norbert is what Rogers describes as a unique challenge.  “His ears and face are so unique that we wanted to accentuate these specific characteristics,” Rogers explains.

“We did his styling in a way to highlight mainly his hilariously cute butterfly ears and also create a teddy bear look. He almost looks like a stuffed animal.”

Norbert is more than just a cute face. He also is a busy dog who volunteers at nursing homes, hospitals, and schools. Norbert also supports many charities.

“He has caught the imagination of the world as his popularity continues to soar,” Rogers says. “Even though he’s a very tiny animal, when he’s brought into a children’s unit at hospitals with terminal patients, he brings instant smiles and laughter to children. I believe he helps them forget for a little while that they are sick and in a hospital, and that’s his miracle.”

Grooming Norbert, like grooming most mixed breeds, allows for a world of creativity.  “He’s a mix breed dog and when you first look at him from a groomer’s standpoint, you see Maltese, but then he has these butterfly ears like a Papillion, so he’s very unique,” explains Rogers.

When trimming dogs in anything other than breed standard trims, Rogers provides a style that shows off their best features and meets the requests of his clients. “Some clients want a teddy bear look, some like the look of a Schnauzer, even though they have a Goldendoodle, so there are no hard and fast rules in the real world of grooming.”

Grooming dogs with all different looks is undoubtedly fun, especially if they could end up in a commercial or on the cover of a magazine, but as Rogers explains it is also serious work.

“In a place like Los Angeles, looks and particularly your dog’s looks, are very important. If you walked down Rodeo Dr. in Beverly Hills or Montana Ave in Santa Monica with an un-groomed dog you would get the most awful looks from people. It becomes very serious when your client’s reputations are on the line,” says Rogers.

As a groomer, Rogers was deeply inspired by the work of another groomer he greatly admires. “The person that inspired me the most in the grooming industry is a famous groomer by the name of Jay Scruggs who won groomer of the year several times,” says Rogers. “I have studied most of his seminars and video series and really think he is a genius and an incredible artist.”

“As well as being a professional groomer, I am also very supportive of animal rights,” says Rogers.  A long-time client of Rogers’ who passed away in March of 2015, Sam Simon, played a major role in his growth.

“He was most known as the creator of The Simpsons TV show as well as many other shows,” says Rogers.  “His real passion was animal rights and he was the most generous, fearless advocate for the well-being of animals—donating money all over the world to help abused animals—I really looked up to him and consider him a mentor.”

Today, Michael L. Rogers Mobile Pet Services is always very busy. As the business continues to grow, Rogers’ future plans include hiring additional groomers. For Rogers, volunteering and giving back is another important part of what he does. “We have gotten many calls through the years from some of our friends that work in rescue,” says Rogers. “They have a potential forever home for one of their rescue dogs but they are in such awful condition. We have volunteered and ran out to trim and clean them up,” he explains.

Grooming and seeing his clients light up as they get their pet back in their arms after getting all cleaned up is what Rogers loves and it continues to motivate him each day.  “I always enjoy the look on people’s faces when they hand us over an overgrown, possibly matted pet, and we give them back a sculpted, clean, cute snuggable little buddy,” says Rogers.

For anyone interested in becoming a pet groomer, or those just starting out, Rogers advises them to get as much hands-on experience as they can. “Real world grooming can be much different than it looks when you watch a professional doing it in a video,” says Rogers.  “A lot of this business is improvising.  Animals are very sensitive and it [grooming] requires a lot of responsibility. These are people’s furry loved ones.” ✂ 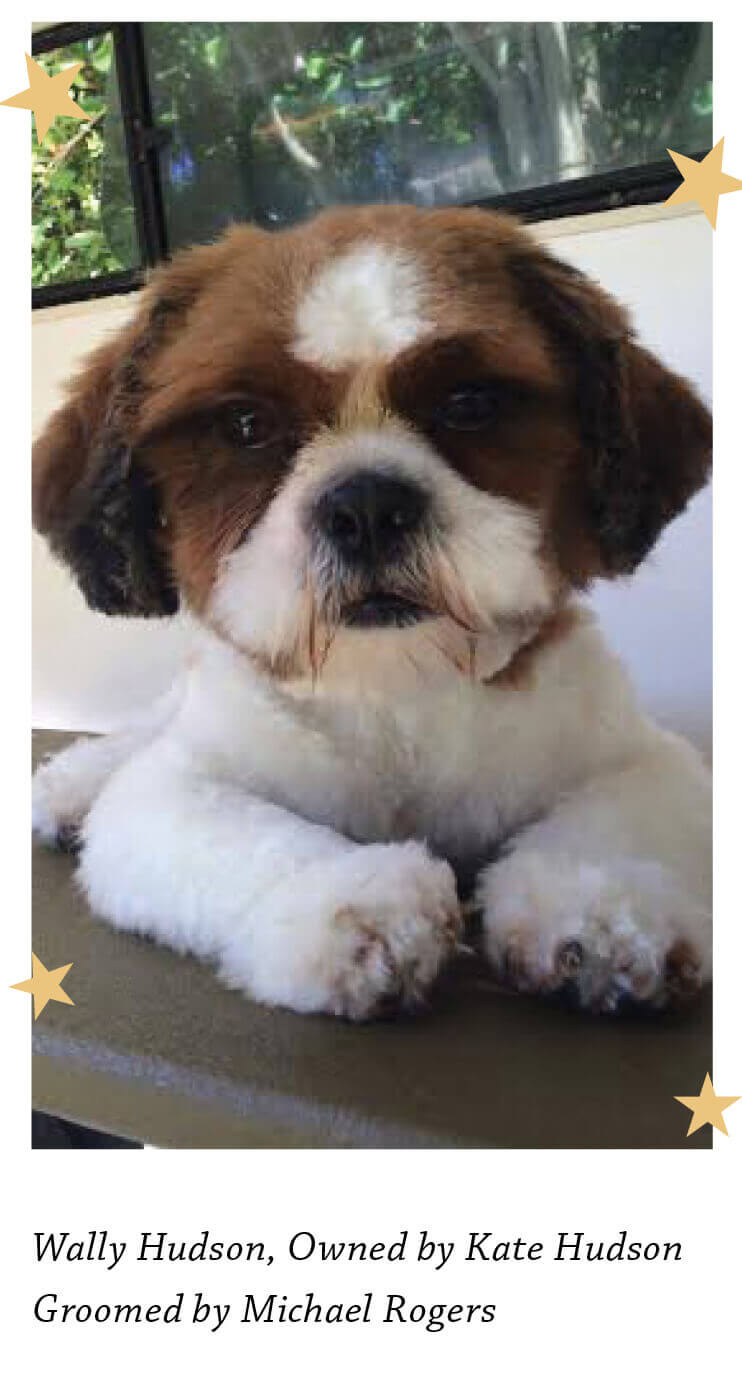 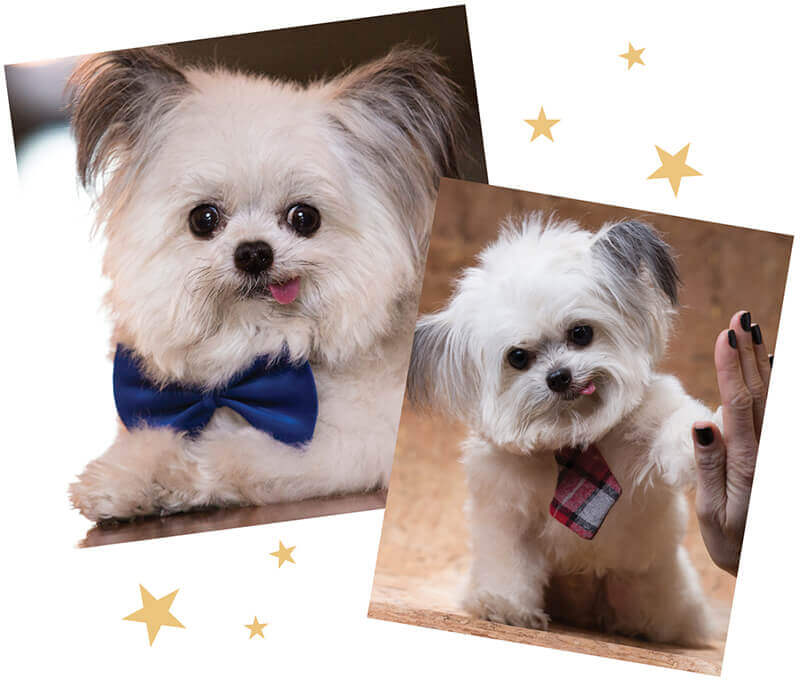 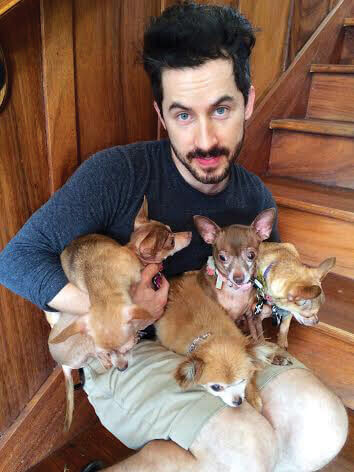