Why Is There a Space Between the Blades of My Shears? - Groomer to Groomer
Skip to content

The next type of shear is the convex shear. These shears still have a space, or “set,” but it’s very, very small. It would be difficult to get a piece of paper to slide between the blades.

The convex shear cuts hair completely differently than the beveled edge shear; it chops rather than slices. Why? Because the convex shear edge is a razor rather than a slicing bevel. The edge is so sharp that it doesn’t have time to slice. It cuts straight through the hair with a single closure. You shouldn’t feel hair cut with a convex edge, because it’s that sharp. When you do feel the hair cut and it starts to push the hair, it’s time for sharpening. Groomers get the best finish using convex shears. Use them on clean, combed out dogs only. Any dirt or knots in the coat can cause the convex shear to dull out very quickly or pit the razor edge, which can cause hair to fold.

Below is a picture of a convex shear with the limited “set” between the blades. The only space it needs is for the blades to pass each other without binding. They need to be close together. If you loosen the tension of a convex shear or thinner too much, the blades can grab each other about an inch from the pivot screw. If this happens, don’t keep using it; it needs to be honed again. Tension is mainly for adjusting the way the shear cuts along the blades. It’s not intended to make it easier for you to scissor. When the tension is too loose, the shears may fold at the tips in tough coat. They make shears with ball bearings instead of tension screws at the pivot. This setup will allow you to scissor with ease no matter how the tension is set.

This information is for groomers as well as new sharpeners so that you know the characteristics of both styles of shears. Some people buy shears and really don’t know any more about them except that they cut hair and feel good in their hand. There is a difference. Most groomers use beveled edge shears for general grooming and roughing in dirty coats, and they use convex shears for finishing work only.

I hope this helped you, in some way, to make decisions on shear purchases and what you will be using them for in your shop. “ 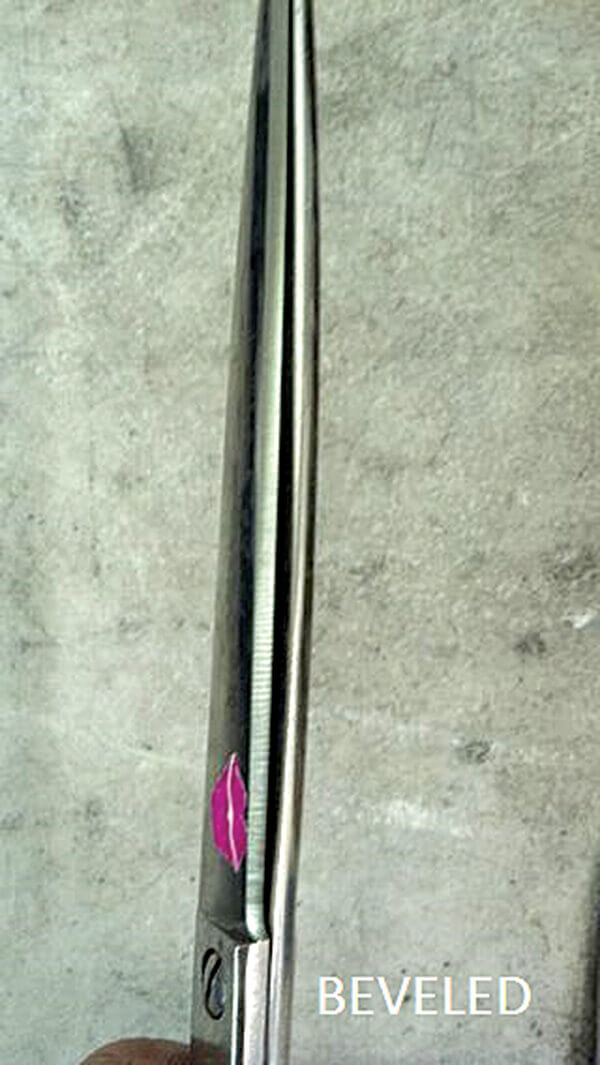