“Being on Pooch Perfect was the most amazing and incredible experience of my life—and also the hardest thing I’ve ever done,” says contestant Deb Compton. “But, I’d do it again in a heartbeat!”

Deb appeared on Season One of the ABC reality series Pooch Perfect. Out of thousands of applications, she was one of the groomers chosen for the show. Ten teams competed for the Pooch Perfect trophy and $100,000—the largest cash prize in dog grooming history. But the record–breaking prize money wasn’t the only reason some groomers wanted to be on the show.

“I never aspired to be on TV,” says contestant Riza Wisnom with a smile and a chuckle. “I only applied because it would be a great bucket list achievement, and I wanted to see how far I could go in the competition.”

“I wanted to be on Pooch Perfect because I think the show can be the beginning of a new era for groomers where people will understand how much art and love is involved in what we do,” said contestant Gabriel Feitosa, who is originally from Brazil but now lives in San Diego, California. “I wanted to be part of this project that can shift the perception of our industry permanently.”

New Orleans native and self–taught groomer Adrian Smith said he applied because, “I am a firm believer in dream–chasing. I live by the mantra: It’s never too late to follow your first love—and succeed.”

Pooch Perfect, hosted by the award–winning actress Rebel Wilson, featured eight weeks of themed challenges that tested the participants’ skills as they created and executed multiple themes, hairstyles and colors on the dogs (or goat) they were assigned. Each episode featured a “Puppertunity Challenge” which gave the winning team immunity from that week’s elimination. Then, the team that won the “Ultimutt Challenge,” was named “Best In Show.”

Being on a reality show is more involved than you might imagine. The contestants had to put their lives and businesses on hold for more than a month to participate in the show.

“For me, the most difficult part of the competition was literally going up against some of my grooming idols,” said Adrian Smith. “And, most mornings we had to be camera ready at 6 a.m. and didn’t wrap up filming until about 10 p.m.”

“Yes, the shooting schedule was grueling,” adds contestant Corina Stammworthy. “We were also shooting during the height of the pandemic in California so there were very strict COVID protocols in place.”

“Being creative ‘under pressure’ was the hardest thing for me,” says Riza Wisnom. “There just wasn’t enough time for me to pull off stunning designs that would really knock the judges’ socks off.”

There was plenty of pressure on the set of Pooch Perfect. During every episode, the teams had to successfully complete two grooming challenges in a limited amount of time…on dogs they just met…surrounded by cameras, bright lights and other distractions, all the while knowing that the judges and more than three million people were watching their every move.

Whether the viewers realized it or not, the weekly episodes showcased more than the technical qualifications of the groomers. During the challenges, they saw how the contestants interacted and bonded with the dogs they were working on, and how the teams encouraged and supported each other.

“Pooch Perfect is entertainment that showcases groomers and what we do,” says contestant Justin Dorn emphatically. “The things that we do every day, like cutting off huge mats and clipping terribly overgrown toenails, are not what the TV audience wants to watch. If we want a spotlight to be shown on pet care and grooming, then it has to be presented in an entertainment form.”

“Yes, we, as a profession, are in the spotlight,” adds Riza Wisnom. “It’s important to stand together and present a unified image of professionalism and decency.”

“I think the show elevates the groomers to celebrity status,” says Gabriel Feitosa. “Now we are seen as true artists.”

Each contestant was permitted to select one person to help them during the competition. Deb Compton chose her son, Jordan Jones, for her assistant.

“He’s the closest thing I have to a clone,” says a beaming Deb. “Being on the show and sharing the experience with Jordan was incredible. He had never done any coloring or carving before. I watched this kid grow and blossom right before my eyes.”

Deb is a creative groomer and she will be the first to tell you that there is a huge difference between being in a creative competition and being on a reality show.

“When you are doing creative competitions, you usually work on your own dog at your own pace, and you can spread out the preparation,” says Deb. “In Pooch Perfect, you are given the challenge, then you meet the dog. Then, it’s ‘go’ time. You have to quickly decide what you are going to do on the dog, what products you have to work with, and what you can accomplish within your timeframe.”

Contestant Alyssa Kasiba is also a creative groomer. Week after week, she made magic happen on the Dogwalk.

“As a creative groomer, I usually only get to do one design a year,” shares Alyssa. “You go to all the shows and try to keep improving that one design. By the end of Pooch Perfect, I created 16 new pieces.”

Alyssa didn’t know it, but her boyfriend, Justin Dorn, was going to create some magic of his own. During an episode, the judges called Alyssa saying they needed to ask her a few questions. When she stepped out onto the Dogwalk, there was Justin. He tenderly took her hands in his, dropped to one knee and said, “Alyssa I love you with all of my heart. Will you make my dreams come true and become my wife?” Amid applause, cheers and tears from everyone on the set, Justin slipped the ring on Alyssa’s finger.

Throughout the eight–week series, viewers got to know the team members and to follow the journey that led each of them to Pooch Perfect. One of the challenges required the assistants to do the actual grooming. That’s when Corina Stammworthy revealed a very personal issue.

“In episode five I was tasked with grooming a dog by myself,” shares Corina. “I was shocked that I not only was able to complete the dog, but that we also won the immunity challenge.

“Tasks that require a lot of dexterity, like scissoring, are very difficult for me. Right before my 30th birthday, I learned that I had tested gene positive for Huntington’s Disease and will most likely be in a wheelchair in the future.” Then she quickly adds, “But, I don’t want people to feel sorry for me.”

Lisa Vanderpump, Dr. Callie Harris and Jorge Bendersky had the daunting task of judging Pooch Perfect. During the time they were all together on the set, the contestants got to really know them.

“Lisa Vanderpump is actually hysterically funny in person,” says the team of Macie and Corina. “Dr. Callie is so genuine and sweet and was a huge cheerleader for everyone. Jorge was definitely the knowledge expert and getting his approval meant so much. But, he also was very fun and lighthearted on camera. If a contestant heard Jorge exclaim, ‘Me Gusta!’ (I love it!), they knew they had really impressed him.”

Three teams made it to the “Grand Fur–nale:” Alyssa and Justin, Gabriel and Monse, and Macie and Corina. Their final challenge was to design a dog that represents their team. As they began the most important groom of their life, hummingbirds, puppies, pumpkins, koi, dragons and more emerged from the hair. On their living canvases, these amazing competitors demonstrated the skills that brought them to this life–changing competition. The pressure was intense, yet just one team would harness it to claim the $100,000 prize.

“Everyone here truly is a winner,” Rebel Wilson said as the judges made their decision. “But, tonight there can only be one Pooch Perfect. And…. the winners are….Macie and Corina!”

“This means more than you can even imagine,” Macie exclaimed as tears of joy splashed down her cheeks. “We are so happy that we got to be on this stage, in this amazing competition, and to be on this journey with all our friends.”

They were surrounded by the other finalists in a flurry of hugs and congratulations. As they accepted the trophy, Macie and Corina said to them, “We couldn’t have done it without you guys. It’s all of us. We are Pooch Perfect!” ✂️ 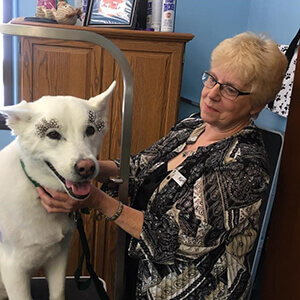