On this not so busy day, one of the new clients was a very matted mixed breed dog named Sandy. Most of Sandy’s coat was severely matted and would need to be stripped down with a 7f, only a portion of his back and bits of his head were not matted. Sandy has nice blondish hair with a bit of texture that would be good for shaping and carving.

Fig 1) I began by clipping away all the excess matted coat, leaving a large portion of not so matted hair on the dog’s back. The dog was then bathed and dried so the fun could begin.

Fig 2) With my scissors, I then cleared an area in the center of my hair saddle that would become the hand carved and sculpted face.

Fig 3) Then using scissors I carved in the outline of the face, nose, eyes, and the mouth, leaving fuller cheeks for more definition. With this part done, I set the whole face with a firm holding hairspray to keep the hair from moving while I airbrushed the details onto the face of this creation.

Fig 4) I chose to use temporary inks that give you instant color, drying on contact, and can be completely washed out of the coat. Since this is a client who knew nothing of this creative project happening on her boy today I didn’t want it to be permanent. I first sprayed a very light layer of brown on the face, then very lightly added pink for the cheeks before outlining the eyes in black.

Fig 5) Detailing the nostrils was fun and also done with a bit of black ink up the nose holes, which I shaped with my fingers after hair spraying.

Fig 6) I then outlined the face, separating it from the outlying hair.

Fig 7) After that I moved on to the mouth (I need more practice there) and the eyes.

Fig 8) Then, to give my bearded lady more realism, I added some eyebrows and put eyelashes on her.

Fig 9) Once I was finished playing with this design, it was time to remove it before the client came to pick Sandy up. So I first trimmed off the beard giving it a whole new look.

Fig 10) But it didn’t stop there. I got the airbrush back out and, mixing some brown and orange together, I colored the hair and cut more of it off.

Fig 11) It is amazing how much a design can change with a few swipes of the clippers. What was left after the last pass was a flat surface outline that could be quickly bathed off, erasing all evidence of the creative design that had just been there. So remember, you can get in lots of fun practice time if you like playing with your shave downs. It’s great fun!✂

Making the World more Colorful,
one dog at a time…

To see more pictures of this grooming adventure visit www.queenofcolor.com or visit me on Facebook 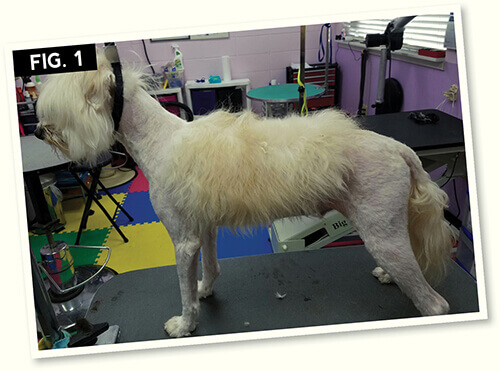 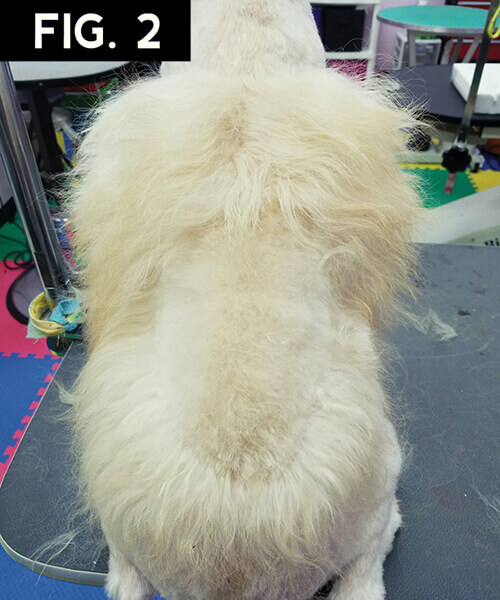 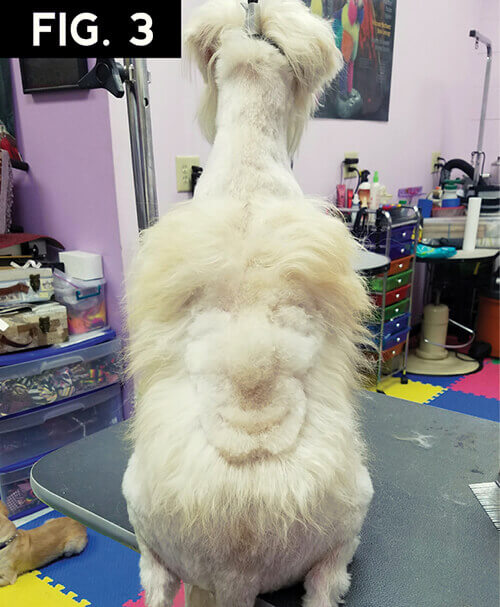 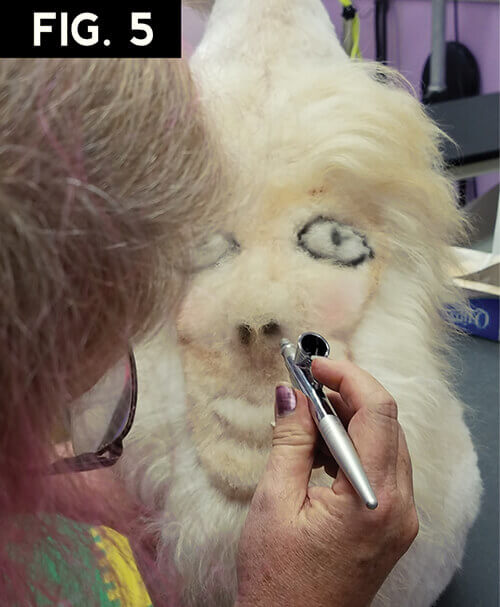 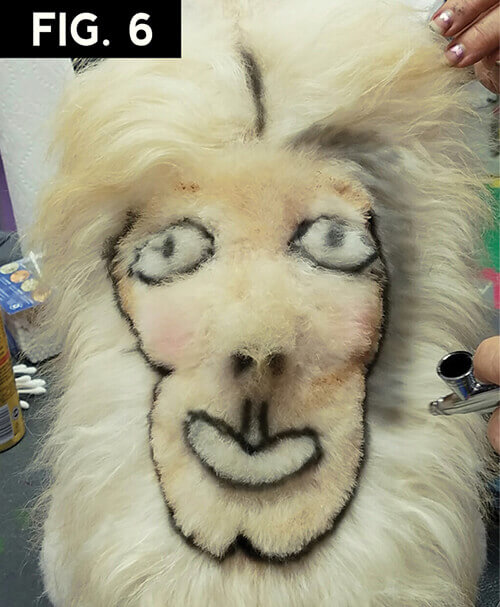 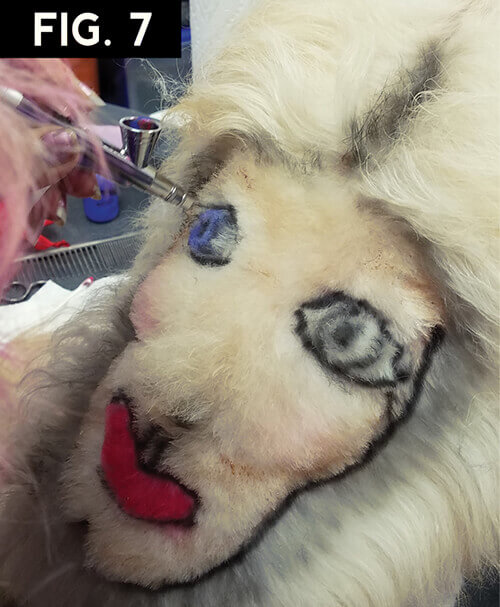 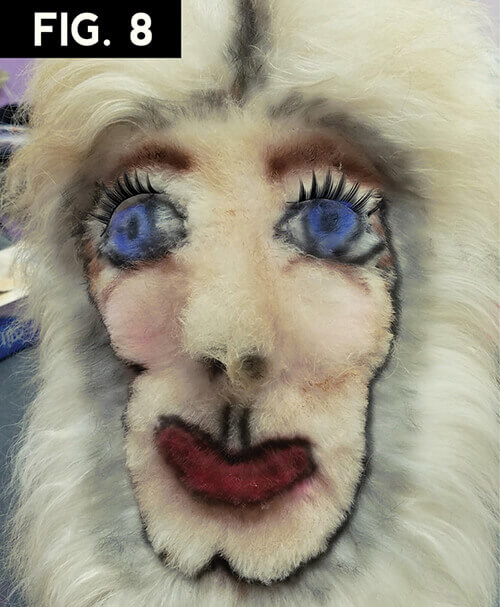 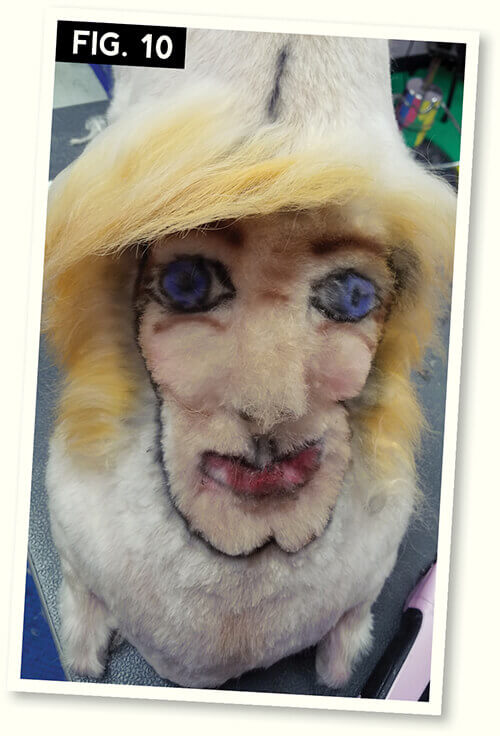 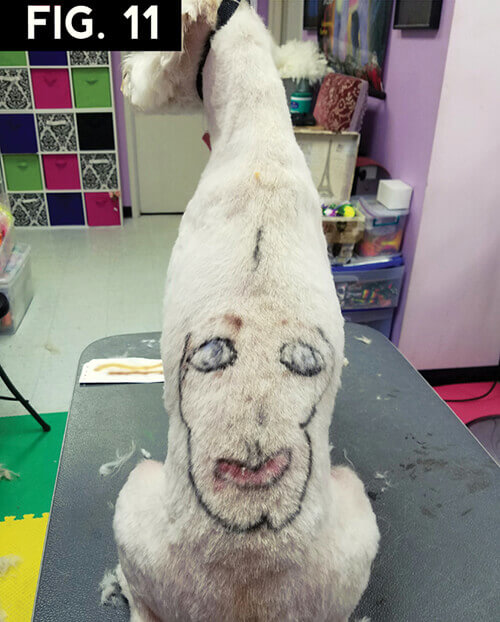