“It’s like a dream! I can’t believe it… I’ve wanted this so badly!” exclaimed an ecstatic Su Eld-Weaver as the huge first place trophy for the 2013 Creative Styling competition was presented to her. “What an amazing feeling!”

A determined Su Eld-Weaver and her Standard Poodle traveled all the way from the United Kingdom to Hershey, Pennsylvania, this past September. They came to compete in the Groomer to Groomer Creative Styling Competition that was held during Groom Expo’s 25th anniversary celebration.

Su is the owner/manager of TopKnot and Tails Poodle Academy based in Rushden, Northhamptonshire. “I have been surrounded by dogs all my life,” shared Su. “I have been grooming full-time for over 17 years. I work as an independent breed specialist for Poodles and creative grooming. I host seminars and travel to other salons taking part in seminars.

“I subscribed to Groomer to Groomer Magazine,” Su continued. “That gave me the inspiration to push myself to see what I could create. I decided to travel to the United States to compete. I figured that if I wanted to consider myself able to hold my own and be up in the ranks of the best, then I needed to compete with the best. This led me to face the top American competitors on their own turf.”

Su competed in Atlanta, Georgia, and in Hershey, Pennsylvania, in 2012, and then she returned to Hershey for the 2013 competition. “I feel very passionate about creative,” said Su. “Creative is a skill as well as a way to express yourself.”

Su used her Standard Poodle Dobby (as in the Harry Potter house elf) to create her entry. She wowed the judges, the audience, and the other competitors with her creative entry, Memoirs of a Geisha, which portrayed a day in the life of a Geisha. “I love Japanese art, and I really love the look of the Geisha girls,” shared Su. “I wanted to show the traditional Japanese art, as well, by including the waterfall, the Japanese crane, and the koi fish.

“I have been working on my dog for a minimum of six months. The carving took around 15 hours, and the color was about 15 hours spread over four to six weeks.”

Once Su had her theme and the prep work done, she still had to get herself and her dog to the competition in Hershey, Pennsylvania. “I fly with American Airlines,” said Su. “They are very good with my dog, and she is well cared for. Dobby travels as excess luggage, and I get to be with her at as many points of our journey as possible. We have to travel within temperature limits set by the airline, so I am never sure until the day of travel if I will make it on to our flight with her.”

Su’s entry was very detailed, and every inch of her Standard Poodle told a story. Her Memoirs of a Geisha begins at her poodle’s head, which became a mountain. The back of the head was a cliff from which a river of bright blue water emerged and flowed down the neck and along the back. According to Su, “flowing water is very symbolic and is used a lot in Japanese art.”

The river passed under an amazingly realistic bridge that had been scissored into the hair on Dobby’s back, and then it continued down her back leg. Su sculpted a gorgeous koi fish swimming in the water on that back leg. Su said that the koi are considered good luck charms in Japan.

On her Poodle’s front shoulder, Su created a stunning portrait of a nighttime geisha in full makeup and with her hair up. On the opposite side of her Poodle, Su had placed a daytime geisha with her long hair down. On the back leg of the Poodle, she sculpted a beautiful Japanese crane, which signifies good fortune, long life, and good relationships. Su turned her Poodle’s tail into a bonsai tree, noting that the bonsai is a tree that grows in adversity.

There were many fabulous entries in that Creative Styling Competition, but Su Eld-Weaver and her Memoirs of a Geisha came “across the pond” to sweep the competition.

“This was an extremely exciting groom to watch as it developed,” said Dawn (the Queen of Color) Omboy, who was one of the judges. “With all the different things she had going on with this dog, Su told a complete story.”

Besides all of her grooming activities, Su is kept pretty busy at home with a husband, four boys, several Standard and Miniature Poodles, six royal pythons, and four tarantulas. No matter how busy she is, you can bet that Su will be back in the States to compete again. “I would like to say that the creative groomers have made me feel so welcome,” said Su. “I invaded their patch and was welcomed into a family environment with open arms. It’s been an amazing experience!” Su Eld-Weaver, creative superstar—what will she “wow” us with next? 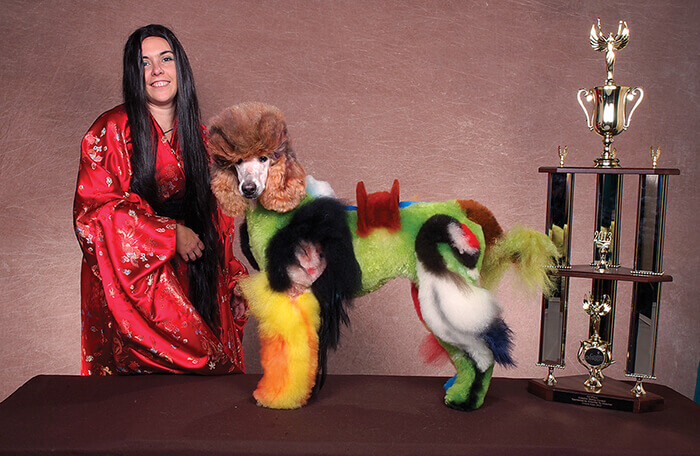