“Where does the money from the silent auction go?” It’s a question inevitably asked at each of Barkleigh Productions’ grooming expos, where attendees can bid on everything from dog beds and pet-themed welcome mats to cordless clippers and bottles of shampoo.

To answer simply, all proceeds from the silent auctions are donated to Gifts of Love International, an organization founded by Don and Barb Kassebaum, the original owners of Tropiclean Pet Products (Cosmos Corporation), to help people around the world rise out of poverty. Gifts of Love International provides aid primarily to Guatemala by establishing an orphanage and leadership school, supporting several churches in some of the country’s most dangerous neighborhoods, and delivering clothes, shoes, and other supplies to the poor and needy. Gifts of Love International has a long history with Barkleigh’s silent auctions. In the 1990s, Don wanted to take a group of groomers to Guatemala so that they could see the work the organization was doing there. Don hoped to deliver a tractor-trailer full of donated items, which would require over $5,000 to transport. Sally Liddick, the late founder of Barkleigh Productions, wrote about this “Groomers to Guatemala” project in Groomer to Groomer, calling it their “most ambitious project to date.” Sally explained, “Exhibitors were summoned to contribute to the project by donating items to a Silent Auction at Groom Expo. Groomers were encouraged to bid on the donated items.” An enthusiastic Hilery Zusi and Frank Rowe took charge of the show close auction, which raised $5,800 and brought the weekend’s total to over $10,000.

Joining Sally on that first trip to Guatemala was her best friend and business partner Gwen Shelly, speaker Judy Bremer-Taxman, industry icon Frank Rowe, and nearly 20 other friends, family members, Barkleigh employees, and groomers. They stayed at the Casa Bernabe orphanage, met the children who lived there, and helped to unload not one but two tractor-trailers full of donations, including a new washing machine for the orphanage. After learning about the chronic financial needs of the orphanage and the people of Guatemala, Sally and Gwen decided Barkleigh Productions would make a monthly financial commitment to Gifts of Love International and would dedicate the silent auctions to the organization.

Over 15 years and many silent auctions later, another trip to Guatemala was in the making. James Severs, the director of operations and marketing at Barkleigh Productions, was interested in serving the less fortunate around the world, and at Gwen Shelly’s urging, he contacted Don Kassebaum about traveling to Guatemala. As Don and James discussed the trip further and more details fell into place, Gwen decided she also wanted to go and would extend the opportunity to the rest of Barkleigh’s employees. It was not long until Gwen, James, and I were boarding a plane in Harrisburg, PA, headed for Guatemala.

As we descended into Guatemala City, I was struck by the poverty visible from the plane’s small window. Small houses constructed from corrugated sheet metal filled the mountainside. Our landing was rough, as the runway was cracked and eroding. I thought about the U.S. airports surrounded by metropolitan areas not far from sports arenas and famous landmarks, and as I looked out over the city surrounding Guatemala’s main airport, I wondered, “Is this as good as it gets here?”

We stepped off of the plane, and the heat and humidity hit us like a wall. The inside of the airport brought little relief. Along with the heat, the sights and sounds were overwhelming. “Sensory overload,” James said. As we attempted to navigate the customs and immigration process, what we assumed were airport employees asked us en español if we needed help with our luggage — in exchange for tips, of course. Barb Kassebaum, who joined us in Houston for our flight into Guatemala, helped to translate and continually advised us, “Stay with the bags.” We closely followed the man who pushed our luggage cart as he led us to the street where Don and a large crowd of people were waiting to pick up their friends and family. Within the crowd were small children who were selling trinkets and helping with luggage in order to earn money for their families. Tourists are likely to give one American dollar, which is approximately 6% of the average daily wage in Guatemala.

In the years since the Groomers to Guatemala project, Gifts of Love International purchased 26 acres of land in Brito, Guatemala. They constructed a new orphanage that currently houses 20 children and several full-time “parents,” including the orphanage director, Daniel, and his wife, Raquel. During the drive from the airport to our hotel, Daniel told us about the kids at the orphanage and their tragic circumstances. Some were abandoned by their parents, while others were taken by the government from their families because of neglect or abuse. Some had even been sold into prostitution by their own relatives, which is not an uncommon occurrence in Guatemala. This is especially tragic, considering the oldest child at the orphanage is only 12 years old.

The Gifts of Love orphanage is one of the few legal and government-approved orphanages in the country, unlike other facilities that may act as fronts for human trafficking. The orphanage receives no financial support from the Guatemalan government and relies on donations to Gifts of Love International to provide the children with food, housing, schooling, medical care, and much needed psychological care. “Our position as a home,” Daniel told Gwen, “is to give them health, psychologist help, school, education, and our love. It’s difficult, but we are going to. We are very glad and so grateful for people like you, your company, and the people who work with you [for] helping us.”

We first met the children at a Sunday morning church service in Escuintla, where they greeted us with excited waves and bright smiles. They ran up to their abuelito y abuelita — their Grandpa Don and Grandma Barb — and embraced them tightly before following them into the church. At the end of the service, Gwen had a special surprise for all of the children. With eager anticipation, the kids sat on the edge of the stage at the front of the church, and Gwen went down the line passing out candy necklaces, lollipop rings, and other sweets. Because the orphanage does not use any of its food allowance for candies, cakes, or anything other than necessities, this surprise was a welcome treat for the children. The way their eyes lit up and their smiles grew showed us how much they appreciated the gift.

Later that afternoon, we followed the dirt road that led to the orphanage in Brito. Don pointed out the neighboring chicken farm, families washing their clothes in the river, and the 7.5-foot-high concrete wall that surrounded all 26 acres of their property. Just inside the front gate was the medical clinic where the staff doctor conducts health examinations of the children. Across from the clinic on the other side of a large field was a new red barn, which Don and Barb hope to fill with animals like horses and cows. They currently have one horse, two cats, and two Golden Retrievers named Cosmos and Barkleigh. “They’re great therapy for the children,” Don explained.

Just past the barn was the construction site for what will be Daniel and Raquel’s new home. While the workers busily laid the concrete blocks, Don and Daniel gave us a brief tour, showing us what will become the kitchen, pantry, and bedroom. Also under construction was a new house with space for 18 kids. Don has plans for even more houses on the property and anticipates the orphanage eventually caring for over 100 children. The children currently live in one house with the girls sharing two rooms downstairs and the boys sharing three rooms upstairs; the parents have private rooms on each floor.

I actually stayed at the orphanage Sunday night and joined everyone there for a typical Guatemalan dinner: scrambled eggs and tortillas. The four oldest girls at the orphanage were excited to have me share their room. They even mopped the floor when they found out I would be staying there, because they wanted the room to smell nice for me. We were all a little frustrated that we couldn’t understand each other, but some of the girls were very patient with me and tried various ways to communicate successfully. Eventually we were able to understand each other a little bit, and before we went to bed, I learned that Jesica was working on a sewing project and Dulce was 12 years old.

Half of the children went to school the next morning, and the rest would go the following day. While the children waited for their breakfast, I went to the mill where one of the staff members brings the corn to prepare for tortillas. When we got there, a little girl had just finished milling her corn. I didn’t realize until we were leaving that she had come alone and that she was hauling her load of corn back home on her bicycle.

As we waited for the children to come home from school, the parents sorted through the donations we had brought with us. Family, friends, and strangers from across the U.S. had sent enough donations to fill several large suitcases and a large box to capacity, each of them just shy of the airline’s weight limit. The parents were thankful to see soap, toothpaste, clothes, shoes, baby bottles, and toys among the items. Some of the special gifts, like toy cars and dolls, would be given to the children as rewards for doing well in school.

Daniel then told us how someone had donated money for the orphanage to buy new underwear for the children. School uniforms were a greater need at the time, so they decided to use the money to purchase those instead. When we arrived, Daniel was still hoping the orphanage would soon be able to purchase new underwear as well. He considered it a great miracle when they opened the box of donations and found a new pack of boys’ and girls’ underwear in every size.

Before we left the orphanage, each child received a pillow/stuffed animal that we brought for them. As each child’s name was called for them to come and receive their gift, all the other kids cheered. There was so much joy in that room. We were able to tell the kids — through a translator ­— how much we loved them and how much they had blessed us despite our intentions to bless them.

Those children will be the longest lasting memories of our brief time in Guatemala. They are also the true answer to an often-asked question. Where does the money from the silent auction go? It goes to Eddie’s school uniform, Estrellita’s doctor bills, Fernanda’s breakfast, and to the care of all their brothers and sisters. 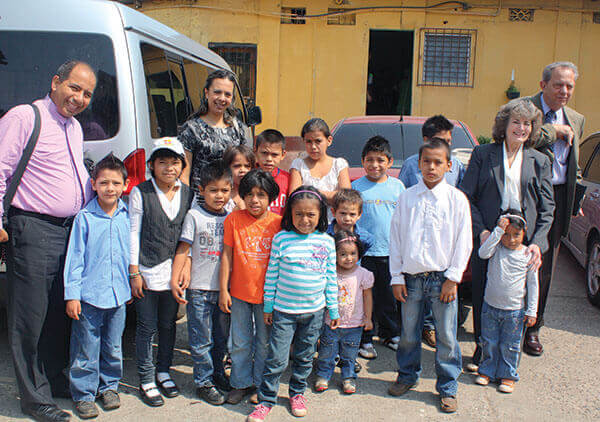 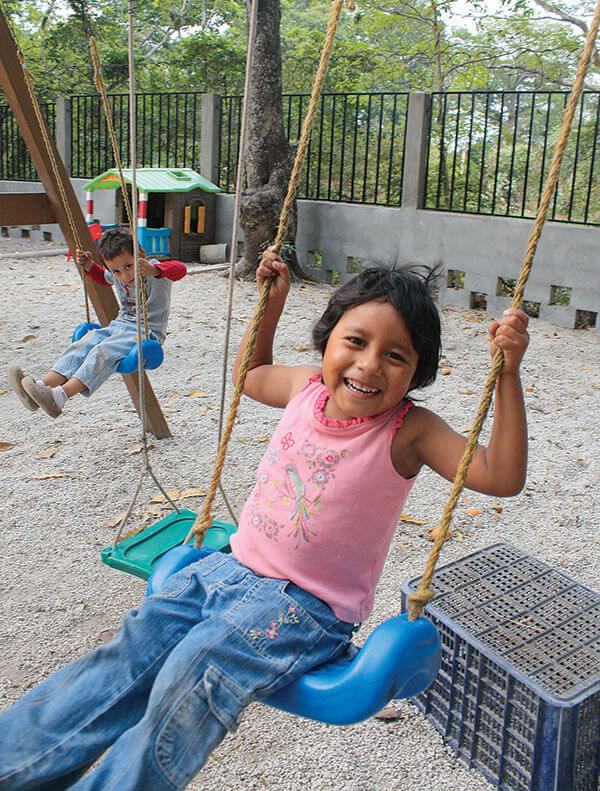