Every groomer’s story had to start somewhere. Even the top groomers had to awkwardly hold shears for the first time; practicing holding their hand steady. Before we become great at anything, there are many hours spent practicing and studying. It doesn’t happen in one moment, but over time, a groomer’s movements become less cautious and more fluid as they begin to have the confidence of a true professional. For many groomers, grooming was a hobby long before it was a career. Years after grooming skills have been perfected and grooming has become more than just a hobby, holding on to the excitement that was felt when an interest in grooming was first born is still important.

In the beginning, it’s easy to be enthusiastic about new passions and interests. Do you remember your early grooming career? When you were just starting out, learning each new technique was exciting. It was easy to have great admiration and appreciation for other groomers and beautifully groomed dogs in your early grooming days. Holding on to those feelings even after many years as a grooming professional can mean the difference between just going to work every day or living your dream every day.

For Roy Laferriere, owner of Roy-L Groomingdales in Centerville, Massachusetts, his love for grooming is very much the beating heart of his career and business, just as it was when grooming was a hobby for him. “Even though it’s my business now, I still like to look at grooming as a hobby because you enjoy it more,” says Laferriere who began grooming over 25 years ago.

It was an ASCOB American Cocker Spaniel named Desiree that was one of Laferriere’s early inspirations as a groomer.  “I purchased her at 8 weeks old,” says Laferriere who remembers taking his show cocker out and around town and getting complimented on her beautiful coat and the grooming that he did. “People would ask if she was a show dog,” says Laferriere. With the help of Desiree’s breeder, Laferriere learned to keep his Cocker Spaniel groomed properly for the show ring. “Breeder, Annie Noble taught me
the art of grooming a show cocker,” he says.

For 9 years Laferriere showed dogs on and off and enjoyed spending time at the dog shows, admiring the breeds, and learning more about grooming. Through word of mouth, he began grooming not just his own show dogs, but other dogs out of his home. There was no question that Laferriere enjoyed all aspects of grooming, and the next step for him would be going into business for himself as a professional groomer. “A friend, Barbara Rooney, who also groomed show dogs, had the faith in my dog grooming to inspire me to purchase the dog grooming salon I own today,” says Laferriere.

Making the decision to run and own his own business as a professional groomer would be a huge transition for Laferriere and, like any new business owner, he had his fears. Having support and encouragement made him feel less nervous about such a big decision. “My wife, Patrice believed in me as a groomer enough to encourage me to own a business to support our family.  If you have people believing in you, it inspires you to believe in yourself,” says Laferriere.

Laferriere’s passion for grooming began with grooming show dogs, and it was important to him that this was incorporated into his new business. “We like to say every dog is a show dog when they leave Groomingdales,” says Laferriere. Over the years, the business has groomed dogs of different breeds for the show ring, but even the dogs who are not showing leave Groomingdales looking their very best.

The positive environment and gentle handling that dogs experience when they visit Roy-L-Groomingdales really make the business stand out. “The owners always share their story of when they say it’s time to go to Roy’s and their dog’s tails are wagging and they jump in the car,” says Laferriere.

Laferriere has found that, when it comes to grooming, quality always comes before quantity. He believes providing detailed grooming rather than rushed work is always important. His advice for new groomers is to work at a comfortable speed. “Be patient with the animals and take your time learning each breed’s specific styles,” he says. “Start off grooming only a few dogs a day to feel comfortable and not rushed.”

Outside of grooming, Laferriere enjoys being in the presence of dogs through training, competing, or  just enjoying some bonding time. He trains his dog Rolex, a black Standard Poodle, in a variety of sports including obedience, trick training, agility, and even a bit of musical freestyle. Recently, Rolex earned his American Kennel Club, Rally Novice title.
For Laferriere, grooming will always feel like a hobby that gives him endless enjoyment even though it is his career now. Having the same appreciation for grooming now as he did when he was just starting out makes Laferriere feel grateful. “This job is like no other,” says Laferriere. ✂ 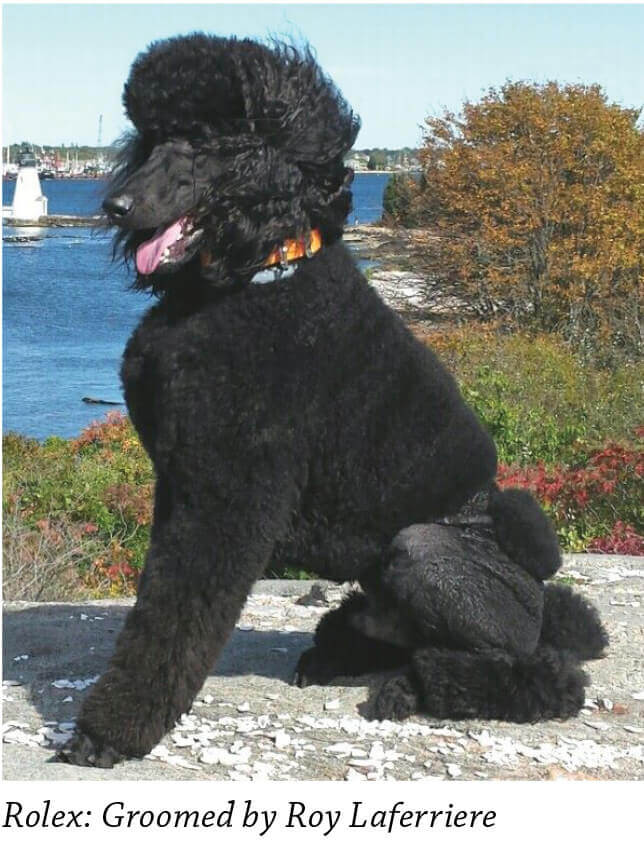