“The Houston World Series of Dog Shows is the longest continuous AKC Cluster Show in the country,” says Cluster Coordinator, Tom Pincus. “This is our thirty-eighth year. We had an entry of 12,500 dogs over the five day show.”

This indoor show is held in the immense NRG Expo Center at the fabulous Houston sports complex, in Houston, Texas.

“The show brings in 25,000 to 30,000 spectators each year,” continues Mr. Pincus. “The way we do that is to continually add attractions that the public likes. This year one of our new additions was Groom Texas – which featured the exciting Creative Grooming Competition.”

Groom Texas, presented by Barkleigh Productions, was an event geared toward the professional groomer. It offered a wealth of education and entertainment for anyone that is involved in the pet care industry.

There were educational seminars presented, and four of the courses – The AKC Poodle Class, The Creative Groomers Association Certification, The Brusher Bather Program, and The AKC Salon Certification program, presented certificates to attendees who successfully completed the class requirements.

Groom Texas marks the first time a grooming show has been held within an AKC dog show. You might wonder how the dog show world and the professional grooming industry teamed up for this ground-breaking event….

“We started to work with the American Kennel Club to do education for a certification program,” shares Todd Shelly, president of Barkleigh Productions, Inc. “Then, Eukanuba contacted us and expressed interest in having a Creative competition at their AKC show. It had nothing to do with the AKC certification we were working on, but it fit in nicely because we already had a relationship with the AKC.

“We held the creative competition and it was a great success,” Mr. Shelly states. “That was a starting point for professional groomers and the dog show world to join forces. When we were asked to do the Houston show,” Mr. Shelly continues, “I knew it was a great opportunity for the dog show world and the grooming industry to come together. It’s very exciting for the groomers, the show people, the vendors and sponsors, and the general public to be able to mesh into different areas that will benefit everyone.”

“We had just under two hundred groomers that participated by competing and taking educational classes,” reports Rebecca Shipman, show planner for Barkleigh Productions. “But, there were several hundred more that came to shop and to watch. That’s fantastic for a first time show!”

Carol Fellbaum, owner of A Dog’s Life, was one of the attendees. Her shop is located in Spring, Texas which is a suburb of Houston. “I’ve been grooming since 1987,” shares Carol. “But, I’ve only been competing for about three years. It was great to be at this event! I have a background in showing; my parents bred and raised Pugs and I grew up working for professional handlers.”

Carol competed in the All Other Purebreds Tournament, with a Bichon that is owned by one of her clients. Much to Carol’s delight, she won the class. Then, later in the day, she returned to compete for Best In Show. Once again, Carol was victorious. Carol Fellbaum was crowned Best In Show at the first ever Groom Texas!

“It was so great – really, really exciting,” exclaimed Carol as tears of joy splashed down her cheeks. “It means so much to me to be the first one to win Best In Show at Groom Texas! Here I am, in my hometown – with my family, and also my grooming, handler, and show friends all around me. It was incredible to have people from both professions cheering for me!”

Another never before seen feature at The World Series of Dog Shows was the Creative Styling Competition.

“The Creative Competition attracted a lot of attention,” said Show Coordinator Tom Pincus. “When the Creative dogs walked from the bathing area to the competition ring, the crowd gathered around them like paparazzi to a rock star!”

Lori Craig, a groomer from Moore, Oklahoma, was the winner of the Groom Texas Creative Styling Competition. Her breath-taking entry was titled The Butterfly Garden. Her Standard Poodle was covered with ten exquisite larger-than-life butterflies, and was completed by a spectacular dragonfly that came to life when Lori’s Poodle wagged his tail.

“Groom Texas was a really great experience,” shares a thrilled Lori Craig. “There was a huge crowd all during the Creative Competition. The people were able to watch the competition from start to finish. They could come up and meet the dogs and see how much they enjoy all the attention they get. And, they could ask the stylists questions as they worked on their creations.

“Combining Groom Texas with the Houston World Series of Dog Shows allowed the public to see a side of professional grooming that they had never seen before,” said Ms. Craig. “The show world was really into it, too – We had about 98% positive comments. That was the highlight of the show for us creative groomers – knowing that the people really enjoyed it!”

Judi Cantu-Thacker, a Houston area mobile groomer, was one of the Groom Texas speakers. “I grew up in the industry,” shares Ms. Cantu-Thacker. “My mom was a groomer, and my parents manufactured Lange dryers and Evolution grooming apparel. I’ve been grooming for twenty-four years now.”

“Combining the grooming shows and the AKC conformation shows has been a long time coming.” says Judi. “Having it all under one roof brings it full circle – where the dogs come from, how they are taken care of, what we are trying to achieve with our grooming – it ties it all together.”

“As groomers, we have about two hours to get a dog prepped, bathed, finished, and sent out the door,” Judi continues. “When dogs are prepared for the show ring, the grooming can take several days. In the grooming shop, we take those hair styles and we do them as fast as we can – and as efficiently as we can – and as well as we can, in a limited amount of time. I always encourage my clients to go to dog shows,” shares Judi. “There they can see the dogs – and then we talk about their dog and if it can realistically look like a show dog. And, if it can, we discuss if the owner is willing and able to take care of the hair.”

“Adding Groom Texas to the World Series of Dog Shows is a great concept for a show,” says Todd Shelly enthusiastically. “It’s very exciting that the dog show world and the grooming industry are coming together.

“Now, other shows have contacted us and we will soon be expanding and doing more AKC events,” Todd continues. “It’s great to be part of it… groomers have a lot to offer!” 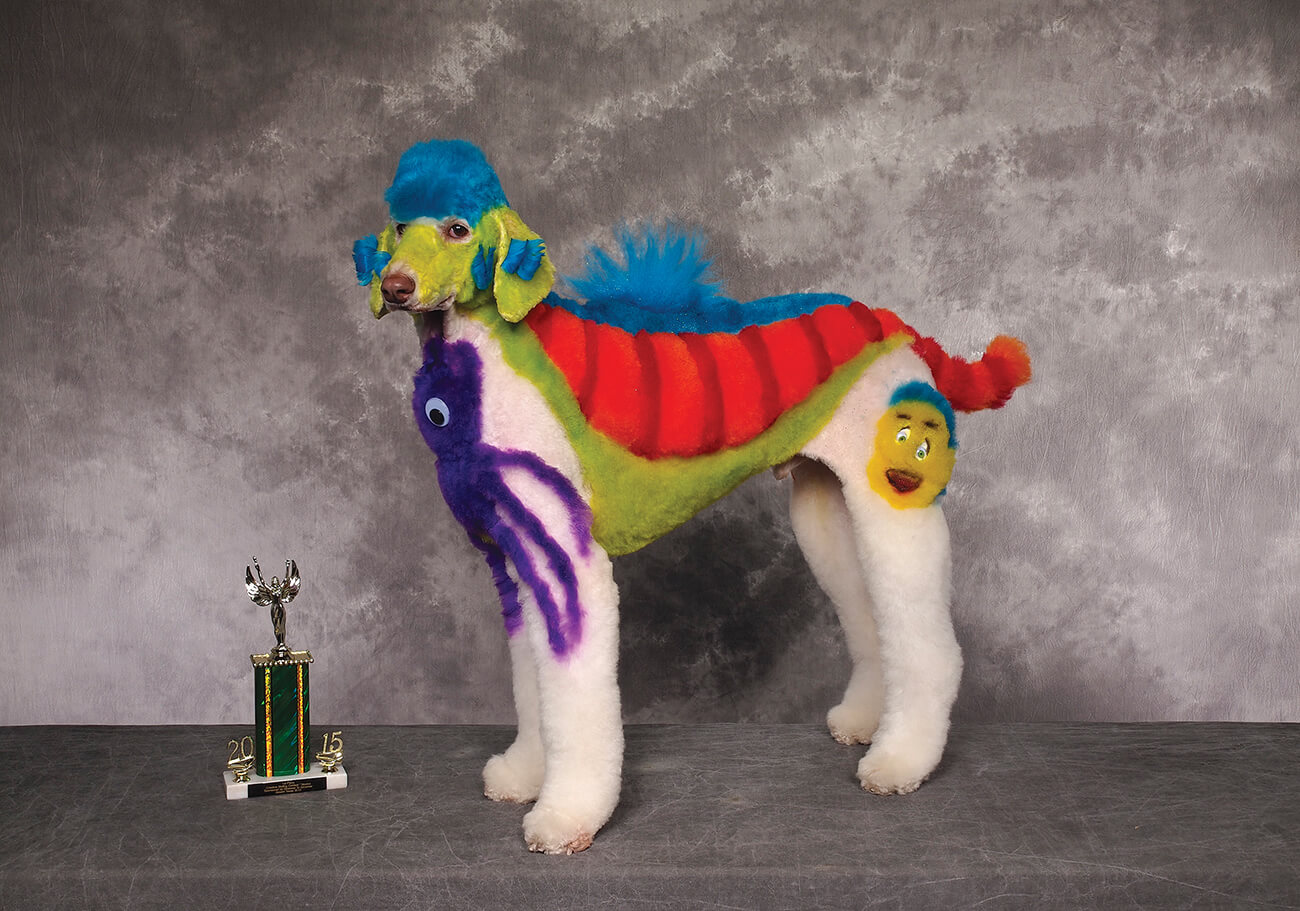 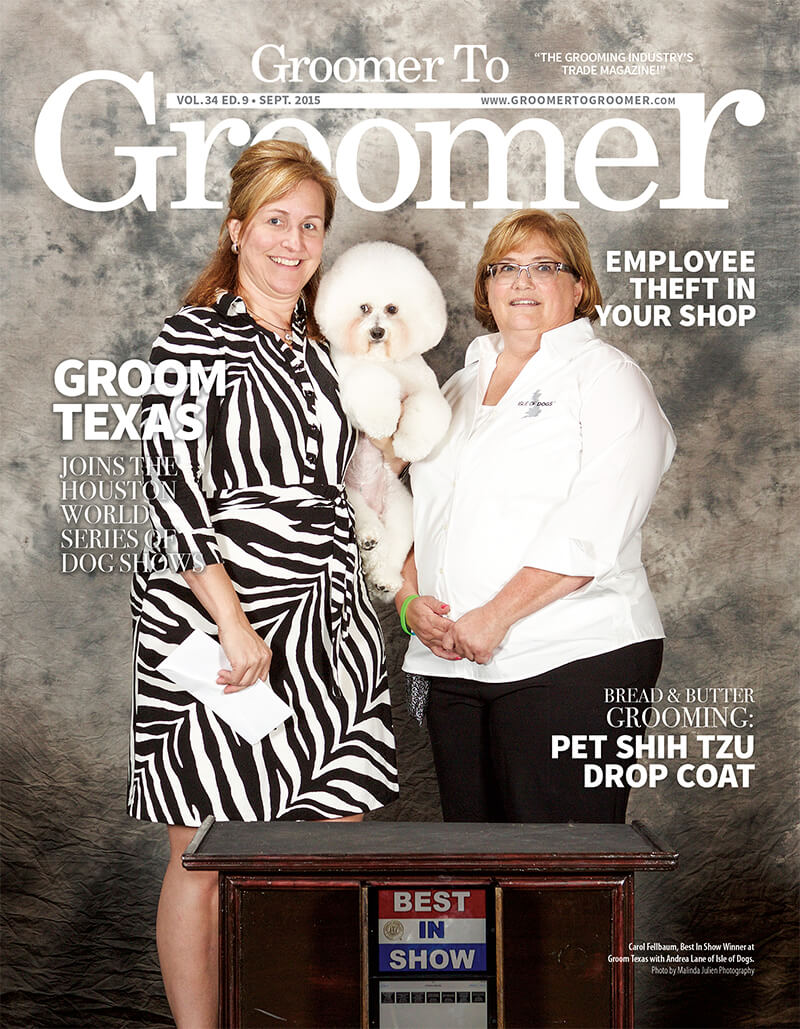