Recently we had the pleasure of meeting Mike Rowe as he was filming episodes for his new show “Somebody’s Gotta Do It” that airs at 9PM Wednesday nights on CNN. The new show is about people and the passion they have for a job or hobby. And we all know that I am passionate about animals and Creative Styling. Mike and his crew arrived at my shop late one afternoon just before my last clients of the day were getting there to pick up their dogs.

One of the last clients was Jamie, who is a personal trainer and owner of Bodies Fitness Studio. As a surprise for her, I had airbrushed her business logo on her rescue standard poodle, Dexter. Jamie was thrilled with meeting Mike and seeing that she and Dexter were now matching. We just adore this guy. Ok, both guys, because Mike is pretty swell too!

When he first entered my salon he said, “I kinda figured you for a hugger.” He got that right! Anyone that knows me knows that is true. So we talked for a minute and I invited him into my grooming room to meet some of my staff and our dogs. There is Adrianne, who got a great pic with Mike, and owns GiGi, a rescue mix whose hair matches her mom’s on occasion. And Jennifer, with her newly acquired pit mix puppy, now named “Big Mike”. Then of course my dogs, Brook and Birdie Jade were there, along with three legged Harry who was still wearing the “cone of shame”, as Mike referred to it.

He is a great dog lover and was just fun to be around. I needed to get some pink dye on Jade for the breast cancer walk the following weekend, so Mike jumped in to help. I was going for a pastel pink so I diluted some dye into spray bottles and put him to work helping to apply the color. Jade loved him!

Another dog that Mike helped to work on while he was there was Bambi the pit bull who got flowers hand painted down one front leg. Jade was then rinsed and while she was being dried we airbrushed Koi fish onto Brook. Next, Mike proceeded to airbrush the logo for the show on the other side of my dog. I wasn’t worried; it was temporary product so I washed the area the next day and repainted it. To see Mike’s airbrush job, go to mikerowe.com and to see more of my pictures from the filming of the show, go to my Facebook page: Queen of Color.

A local radio station announced that there had been Mike Rowe sightings in Columbus, I laughed because he was here helping me make the world more colorful, one dog at a time. Oh yeah, they even changed my flat tire. Who needs AAA when you have CNN and Mike Rowe? Somebody’s Gotta Do It!

Making the World more Colorful, one dog at a time… 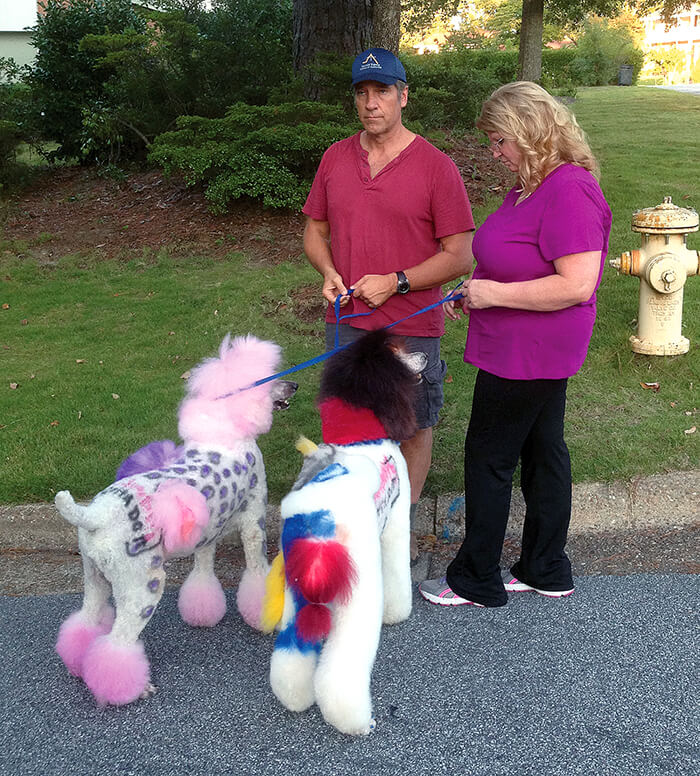