Grooming the Primitive Coat - Groomer to Groomer
Skip to content

Knowledge gained from the mapping and sequencing of the canine genome over the last 20 years has been of real interest to science researchers all over the world, but also gives those of us in the grooming profession some critical information. Since cracking the code of the dog DNA, there has been a flood of information about dogs, their co–evolution with us and their many amazing attributes.

One of the most dramatic discoveries is that we now know that dogs did not descend from the wolf. Dogs and wolves have a common ancestor, but the wolf as we know it today is more a cousin of the dog, not an evolutionary parent.

Another fascinating revelation came through work done by a science team led by Pontus Skoglund, globally–recognized expert in ancient DNA and head of the Ancient Genomics Laboratory in the United Kingdom. Skoglund said in an interview with Live Science, “Genetic evidence from an ancient wolf bone discovered lying on the tundra in Siberia’s Taimyr Peninsula reveals that wolves and dogs split from their common ancestor at least 27,000 years ago…[T]his opens up the possibility that domestication occurred much earlier than we thought before. Although the prehistoric wolf went extinct, its genetic legacy lives on in Arctic sled dogs…Siberian Huskies have a portion of their genome that traces back exclusively to this ancient Siberian Wolf…It’s pretty amazing that there is a special genetic connection to [an ancestor wolf] that roamed the tundra 35,000 years ago.”

Greenland dogs also carry some of this ancient wolf DNA, as do the Chinese Shar–Pei and the Finnish Spitz, the study’s authors reported.

Dog breed experts often call these most ancient dog breeds “Primitive breeds.” The international governing organization for all dog breeds and the largest dog organization in the world, the FCI (www.fci.be), keeps an extensive and valuable genetic database about them. Other websites are devoted to these special dogs as well, such as www.primitivedogs.com.

Skoglund’s team created a diagram to help visualize their findings in canine DNA (Figure 1) that there are really only two “breeds” or categories of dogs: the primitive or Arctic breeds most closely related to wolves; and all the other breeds we know today—those that are more the result of human manipulation.

The three layers are especially visible when blowing a high velocity dryer onto a full–coated Chow Chow. Figure 2 clearly shows the rich, darker red guard hairs or topcoat on this Chow; the lighter, fuzzier undercoat; and the almost black (like their tongues) insulating fuzz along the skin, making up the third layer of the Arctic, triple or primitive coat.

The skin is easily revealed on this Aussie because there is only the topcoat and the undercoat.  There is no third layer of thick fuzz along the skin line as in triple–coated primitive coats such as Samoyeds, Chows, Pomeranians, Huskies and Malamutes.

In this photo of a Husky coat pulled apart (Figure 4) it is very hard to see the skin at all.  One sees, instead, a dense layer of protective Arctic fuzz along the skin—a triple coat.

These three layers combine to protect the body’s vital warmth in harsh climates. This extra–thick undercoat sits underneath the weather–resistant top coat, or guard hairs, the primary hairs that provide the critical infrastructure of this highly purposeful coat. The insulating undercoat can shed out seasonally to varying degrees.

What does This Mean for Groomers?

These primitive coats are qualitatively different than any other kind of coat groomers work on most of the time. That thorough, “combed–through” feeling we are used to experiencing on every dog we groom simply does not apply to the primitive or triple–coated dog. They are not supposed to be able to be combed through from the skin out, as we are trained to do on
most dogs.

Sadly for these special dogs, groomers often make critical mistakes when a Samoyed, Chow, Husky or Pomeranian comes in for services. Some of us will rip and tear and yank and pull until we can get a comb through them from the skin out, thereby damaging the critical layer of undercoat along the skin line and causing pain to the dog. Or, worse, we decide they are hopelessly matted or pelted and shave them, doing serious and often permanent damage to these impressively self–care coats.

When speaking to groomers at educational seminars, I have actually witnessed emotions of regret from groomers, even tears, when they realized in learning all this that they had been hurting the dogs instead of what they wanted to do which was to help them. They had mistakenly thought these coats were just hopelessly matted and needed to be shaved when they couldn’t get their combs through the coat down to the skin.

Groomers are in the coat–preservation business, not the coat–destroying business. Less is more with these heavily–undercoated breeds. All we really need to do, once we get these dogs into our care on a regular basis, is use the high velocity dryer thoroughly during the bath and conditioning steps, in addition to during the drying portion of the groom. This will loosen the undercoat that is ready to shed out, making the final brush–out much easier, less damaging and more effective. Obviously, getting a primitive breed dog in on a regular schedule year round, as with any breed, is critical to a less painful and more productive groom.

Temperature regulation in these coats goes both ways; it also keeps them cooler in the summer by protecting their thin skin from the sun. Educate your clients when they ask you to shave their dog because they wrongly assume that when it pants in warmer weather it is suffering in the heat. Take time to explain the way the coat on a dog protects its skin from the sun and how removal of the protective coat has been linked to cancer and compromised immune systems, as well as a permanently damaged coat.

Monthly baths with conditioning, blow–dry and brush–out will help keep this coat healthy year round. Remove the shedding undercoat, especially during the months prior to the summer and winter solstices when the undercoat changes with the seasons. It will come out easily with a blow dryer, a slicker or pin brush, and a wide–toothed comb or rake. Remember, when brushing these kinds of coats, you only need to brush or comb out the outer layers of the coat. Stay away from the skin with metal tools. Let the air pushed by the high velocity dryer be the only thing touching the skin.

Dog breed experts know that the primitive coat types are qualitatively different, and groomers should too. A clipper or a pair of shears on a double or triple coat can damage, often permanently, the structural topcoat guard hairs that protect and control the undercoat. Cutting away all three layers of a primitive coat can forever change nature’s perfectly–evolved balance. ✂️ 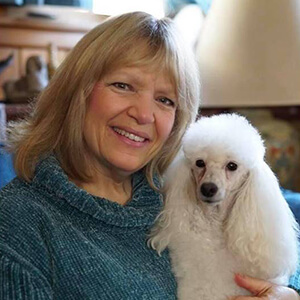 Jennifer is the owner of Love Fur Dogs in Glencoe, Illinois, and was named Best Groomer in Chicagoland by the Chicago Tribune in 2015. Jennifer is an award winning educator and has been a Master Groomer since 1985. Jennifer is a retired schoolteacher who has dabbled in the dog show world for forty years, where she learned to groom. Jennifer founded the Illinois Professional Pet Groomers Association and is part of the leadership team for NAGA, the National Alliance of Grooming Associations. She is the author of the acclaimed "Groomers Guide To The 15 Coat Types" seminars, and a poster and book of the same name. Her academically rich webinars can be found by visiting her website at www.groomersguide.com.