“My mother was a public school teacher,” said Debi Hilley. “She taught first grade and Head Start. She instilled in me the importance of education and went over and above teaching her kids. Maybe her work has something to do with me wanting to help teach other groomers.”

I first “met” Debi on the original online grooming education site, The Groomers Lounge (www.groomers.net). She and I were early members of a growing group of groomers thirsty for knowledge and incredibly excited to have a forum where like-minded people could share the intricacies of the unique career of pet grooming. The Lounge gave us a place to blow off steam, tell funny tales, and best of all teach each other things we had learned while up to our elbows in dog hair. Debi was a vocal member, always anxious to share new ideas. She wrote fluidly and clearly had the gift of being a natural teacher. She could explain even complex ideas so that most anyone could understand them without ever making the reader feel talked down to.

Some of what she shared was controversial, and she was sometimes the target of criticism about her methods. “I think it is funny that newer people in the industry consider controversial things that some of us have been doing for years—wet clipping, for example. It is fine to disagree and discuss, but it gets annoying when people attack me personally and not the idea I am sharing. It would be so much nicer if personal attacks were avoided; that would make the world a better place.” I asked why she continued to put herself out in such a way as to invite criticism. “It’s the Army brat in me, I guess!” she replied.

Debi’s Fan Mail:
I love your blog. I am new to grooming and get the most valuable real life application from your blog. I didn’t have a great education in the shop I paid to be trained in. I purchased some DVDs, and your blog is very valuable in providing little tidbits that aren’t always explained. I would suspect you have a natural teaching ability. Thanks so much!

Debi shares her expertise on many online forums now and writes a monthly column for Pet Age magazine, as well. Her blog, “Grooming Smarter,” which can be found at www.groomwise.com, has been viewed 245,000 times in the past three years. She was nominated twice for the coveted Barkleigh Honors award for Blog of the Year. Grooming Smarter is not just words on the screen; Debi adds helpful photos and also films brief videos so people can see her performing certain grooming tasks up close and personal. “A short little two-minute video can take me five or six tries to get it to where I want it to be. People walk in front of the camera or a dog acts up, but I keep at it.”

Debi’s Fan Mail:
I am so glad to have found your blog, and thank you for taking the time to share and help all the groomers. You are wonderful!
Debi, May God bless you abundantly. You are a wonderful person and mentor. Keep up the great work.

She tries to publish three blogs every month. Her topics are widely varied. “I get inspired to cover a topic when someone at my shop asks me how to do something or if I read a post online where someone has a question. My blog on how to cut a bandana was one of the most popular ones I’ve ever done,” she said. “It has been viewed 1,200 times!” She recently published a short video showing how groomers can blend lines on a dog’s coat using clippers. “500 people viewed that in five days!”

All this teaching takes time. “I dedicate two to ten hours per week working on my blog.” I happen to know that Debi is a busy wife, mother, grandmother, and owner of a high-volume grooming shop. I asked her, “Why do you spend so much time doing that?” She replied, “People were very generous with me when I first started. People like Lisa Leady and Scott Wasserman shared so much. And the Internet was new. Groomers were sharing everything with each other. It was a giant brain dump! I learned so much from everyone else; now I feel like I want to share what I learned both from others and from years of experience. Not many people are doing that for free now, but I think it is important to give back even though I don’t get paid. At least, not with money!” she laughed. “But sometimes I get a letter from someone thanking me, and that just blows me away. Or I will be at a grooming trade show and someone will come up and say, ‘I’ve read your stuff, and I learned so much. Thank you!’ These things make me feel like I am affecting someone’s life in positive manner, and that is such a good feeling.”

Debi’s Fan Mail:
Your blog made me cry today. I would love to meet you one day! Thank you for sharing so much with us throughout the year and may God bless you richly in the year to come.

Debi has taught groomers in person, too. “Too many to count, really,” she said. “I’ve trained eight fully all the way through to where I would call them groomers. Two of those have gone on to compete and win. I have also taught about 20 people to bathe and dry pets, and some of those employees I’ve trained have gone on to become husbands!” Debi’s husband, Chuck, worked for her weekends and on his days off from his regular job for two years. “I figured if he knew what I did for a living, he’d go away. He didn’t.” The two have been married for 13 years, and Chuck still sometimes finds himself in front of a grooming tub.

A man named Ralph Marston wrote “…If you wish to learn, then take time to teach. If you wish to climb higher, then lift others up. If you wish to be wise, then share what you know…” It is said that what you put out into the world comes back to you tenfold. If that is so, Debi’s future should be rich in generosity, because to this helpful teacher, grooming matters. 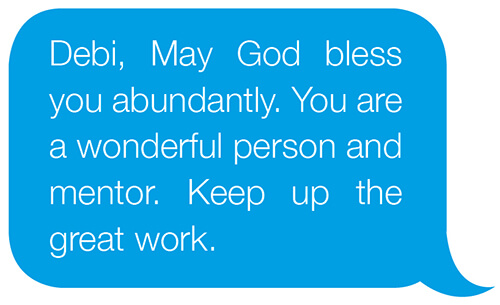